The Volkswagen e-Golf is about to get a lot more competitive with the market-leading Nissan LEAF, thanks to the addition of a new SE entry-level model.The 2016 Volkswagen e-Golf SE will start at $29,815 including destination before incentives. 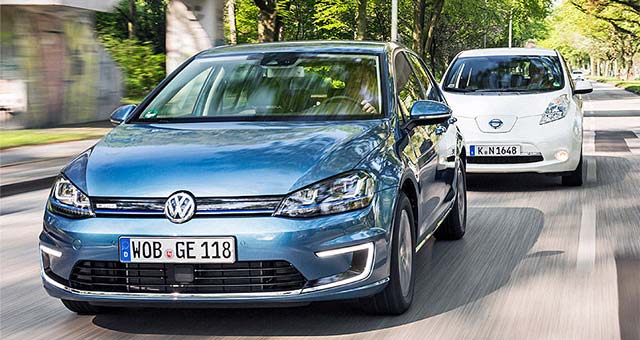 This model is analogous to the top trim levels of gasoline and diesel Golf models, so Volkswagen had some room to slot in a new model beneath it.

The SE replaces the 2015 Limited Edition model, which was priced about $2,000 beneath the SEL Premium–and was, as its name indicated, limited in production. The Volkswagen e-Golf SEL Premium will have a base price of $36,415.

While it boasts a lower price, the e-Golf SE does without the standard 7.2-kilowatt AC onboard charger and DC fast-charging capabilities of the SEL Premium. Instead, it gets a standard 3.6-kW charger, although buyers can specify the more powerful charger and CCS DC fast-charging in an extra-cost option package.

The powertrain remains unchanged, with an electric motor producing 85 kilowatts (115 horsepower) and 199 pound-feet of torque driving the front wheels.

The e-Golf achieves an EPA-estimated Miles per Gallon of Gasoline Equivalent (MPGe) of 126 city, 105 highway, and 116 combined; the EPA estimates that range is 83 miles on a single charge.

Both 2016 e-Golf models also get Volkswagen’s new MIB II infotainment system, although the SE makes do with a 6.5-inch display screen, rather than the SEL Premium’s 8.0-inch screen. SE buyers also won’t have the option of a new Driver Assistance package, which is only available on the SEL Premium. This package includes forward-collision warning, automated emergency braking, and park assist features.

The 2016 Volkswagen e-Golf SE should arrive in dealers by September.