Mercedes-AMG is celebrating its second straight Formula One World Championship with a special edition hot hatch based on the A45 AMG. 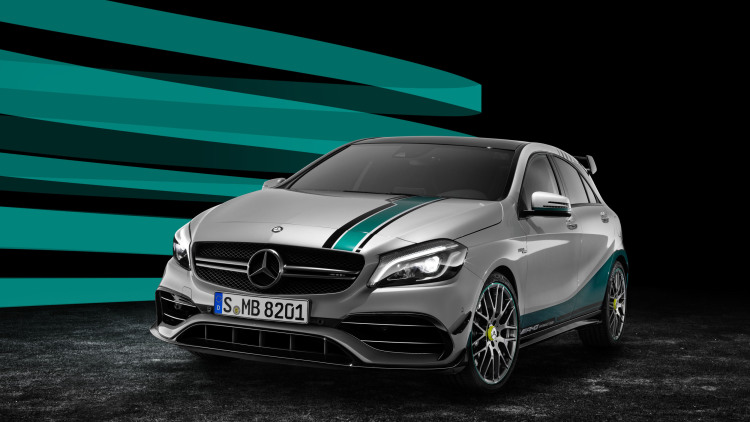 The Mercedes-AMG Petronas 2015 World Champion Edition is available in three shades of gray or silver offset by teal and black accents inspired by the Silver Arrows livery. The aero kit is also upgraded with a new front splitter and rear roof spoiler. Inside, it comes standard with sports seats in leather and microfiber, and both Mercedes‘ Night and Dynamic Plus packages are standard. There’s also special trim and and badging, and it all runs on unique 19-inch wheels.The 2.0-liter turbo four carries over with 381 horsepower, as introduced in the recently upgraded A45. That’s more muscle than even the Focus RS, but unlike the Ford, this Mercedes isn’t offered stateside. Here we have to suffice with the GLA45 crossover and CLA45 sedan, which pack the same engine, but different body styles.The 65,402.40-euro ($69,216.34) asking price may seem like a lot for an A-Class, but it’s considerably more accessible than the special-edition SL63 roadsters with which the German team celebrated last year. This is the second year running that Mercedes took both the drivers’ and constructors’ championships in F1, with Lewis Hamilton re-crowned champion and Nico Rosberg coming in second. Out of 18 rounds already held, Mercedes won 15, with one race still to go. If it wins this weekend in Abu Dhabi, it will match its run from last year, when it took 16 out of 19 grand prix victories.