Head-up displays are nowadays increasingly finding their way into more compact car models. They display important information as a projected image so the driver does not need to look away from the road. Bosch has developed a combiner head-up display offering outstanding display quality and precision that the BMW Group has chosen to fit to a variety of its vehicles. This combiner system, which is initially available for the new MINI Hatch, can be fully integrated in the instrument panel. 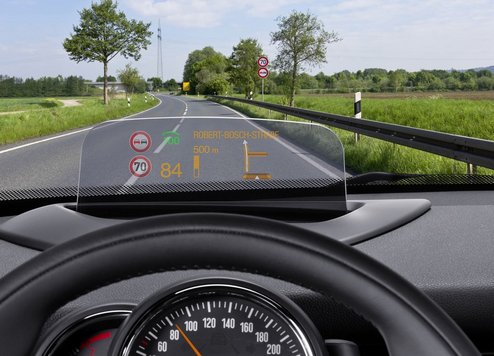 Head-up displays present information directly in the driver’s field of vision. Details like the current speed, navigation recommendations and warnings appear as if suspended in mid-air in front of the vehicle. This has a relieving effect on the driver’s vision since the eyes have to refocus less often. “The driver does not need to constantly switch between looking at the instrument panel and looking at what is happening on the road,” explains Manfred Baden, President of the Car Multimedia division at Bosch.

The new system belongs to the so-called “combiner” category of head-up displays. The image they generate is combined with the scenery outside the vehicle in such a way that makes them appear to merge with one another at a distance of around two meters in front of the vehicle. The system does not project the information onto the windshield but instead onto a small special plastic screen placed before it. The new head-up system is therefore completely self-contained and can be fitted to various types of vehicle without any major technical modification necessary. The displayed information is invisible to the front passenger.

One of the quality characteristics of this new combiner head-up display is that the displayed information remains sharp and distortion-free even when the driver’s head moves. This is achieved through the sophisticated optical integration of all elements of the system. One of the technical highlights is the plastic “combiner” screen, which has an aspheric surface.

The tolerance specified for the front surface is extremely tight. The edge of the screen has been milled in such a way to make it level with the driver’s line of sight, which means it becomes invisible to the driver, causing the displayed information to merge with the background. The rear side has an anti-reflective coating and the surface is extremely scratch-resistant.

The new head-up display is a part of a self-contained module that can be fully integrated in the instrument panel. The plastic “combiner” screen is driven by a variable-speed electric motor to extend it out of the box when needed. When the system is switched off, the screen fully retracts into the box.

The new display comprises an imaging unit and a display unit. The imaging unit is equipped with a full-color liquid crystal display (LCD) with a resolution of 480 by 240 pixels. Similar to a photographic slide, it is lit by a single light emitting diode with a high light intensity. The light signal bounces via folding mirrors to the display unit, whose key component is the “combiner” screen. This projects the image into the so-called “eye box”, the region in which the driver’s eyes are situated.

The angle of the “combiner” screen can be fine-tuned to suit the driver’s height, and the brightness of the displayed information is adjustable by way of sensors or a dimmer wheel. “This new head-up display enables us to reduce the burden on the driver and so make car driving even safer and more comfortable,” explains Manfred Baden.