The 2014 Honda Civic keeps the ball rolling for the popular compact car, offering new styling for Coupe models and some updates for the sporty Si. The Civic competes with some of the most popular cars in America, including the redesigned Toyota Corolla and the Ford Focus.

In addition to these changes, the 2014 Civic lineup gets a new expanded-view driver’s side mirror as standard equipment. All but the Civic LX and HF are equipped with a new 7-inch touchscreen infotainment system with HondaLink smartphone pairing and services, a Smart Entry passive entry system with push-button starting, and a LaneWatch blind-spot monitoring system for the right side of the car. Finally, Honda now offers the Civic Natural Gas model with optional leather seats and a navigation system.

The 2014 Honda Civic lineup is diverse. The 2-door coupe is available in LX, EX, EX-L, and Si trim levels, the latter a performance-tuned variant. The 4-door sedan is also available in these trim levels, plus a more economical HF, a gas-electric Hybrid, and a Natural Gas model that runs on compressed natural gas.

Civic LX, HF, EX, and EX-L models are equipped with a 1.8-liter, 4-cylinder engine making 143 horsepower. A 5-speed manual transmission is standard in the LX models, with a CVT optional. The CVT is included for the HF, EX, and EX-L models, and the Civic HF is tuned to squeeze every last possible mile out of each gallon of gas.

Performance-tuned Civic Si models get a 205-horsepower, 2.4-liter 4-cylinder engine. A 6-speed manual gearbox is the only transmission choice, and this powertrain features a helical limited-slip differential designed to reduce torque steer.

Civic Hybrid models have a 1.5-liter 4-cylinder engine, an electric assist motor, a lithium-ion battery pack, a CVT, and regenerative brakes that recharge the battery. Combined, these components generate 110 horsepower, and the Civic Hybrid can operate solely on electricity at low speeds and for short distances. 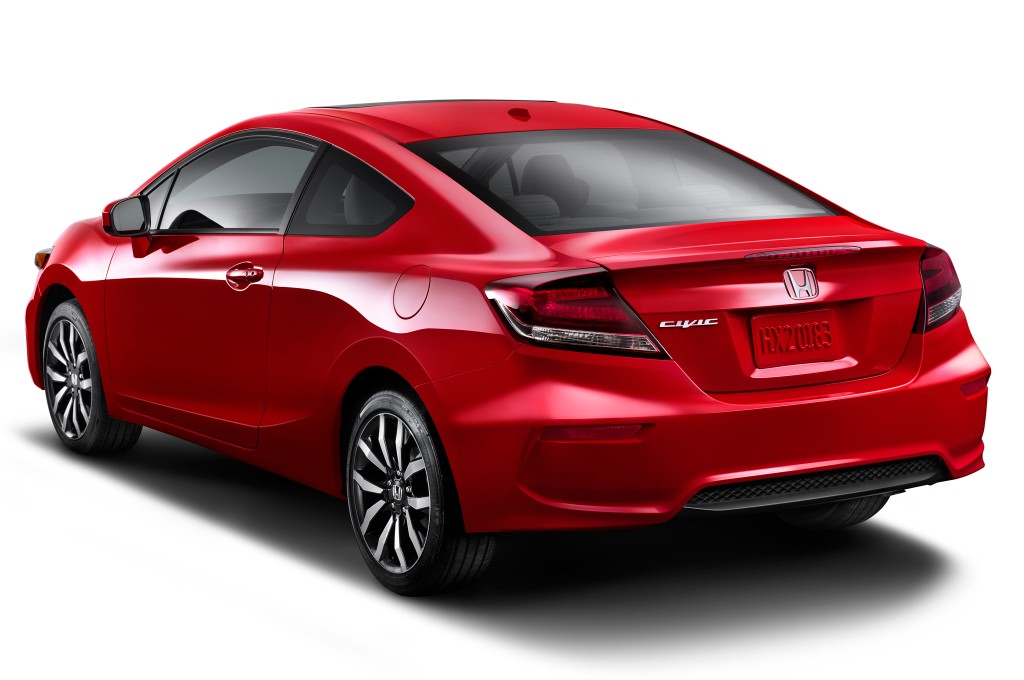 The most popular versions of the 2014 Civic, the LX, EX, and EX-L, are rated to get between 28 mpg in the city and 39 mpg on the highway, with the CVT performing better than the manual transmission.

The Civic HF is rated to return 42 mpg on the highway, but the fuel economy champ is the Civic Hybrid, which gets 46 mpg in combined city and highway driving. The least fuel-efficient Civic is the Si, at 22 mpg in the city and 31 mpg on the highway.

The National Highway Traffic Safety Administration (NHTSA) gives the 2014 Civic Coupe a 4-star overall crash-test rating, while the 2014 Civic Sedan earns a 5-star rating. The Insurance Institute for Highway Safety (IIHS) calls both versions of the Civic a “Top Safety Pick” for 2014, and the Civic Hybrid earns a “Top Safety Pick+” designation thanks to its Forward Collision Warning system.

In addition to a Forward Collision Warning system, the Civic Hybrid is the only version of the car equipped with a Lane Departure Warning system. Most 2014 Civic models are equipped with new LaneWatch technology, and the latest version of HondaLink services features Automatic Collision Notification, which notifies authorities of a collision if a smartphone is paired to the system when the airbags deploy.