The Land Cruiser is the de facto flagship of Toyota’s lineup, with the highest price tag and the most luxury features of any vehicle offered by the brand. Its rugged body-on frame design means the Land Cruise is something of an anachronism – the vast majority of SUVs have switched to lighter and more fuel-efficient unibody construction – but also makes it one of the most capable off-roading vehicles of all time.

The Land Cruiser was updated for the previous model year with a number of subtle interior and exterior revisions. The other big news was the addition of the previously optional Upgrade package – which Toyota says the vast majority of buyers selected – as standard equipment.

Under the hood of the Land Cruiser is a potent 5.7-liter V8 that makes 381 horsepower and 401 pound-feet of torque, enough to propel the 5900-lb SUV from zero-to-sixty in the mid six-second range. The muscular engine also enables the Land Cruiser to tow a substantial 8,500 pounds. A six-speed automatic transmission provides silken shifts and offers a wide spread of gears to maximize efficiency, though fuel economy is about what one might expect: 13 in the city and 18 on the highway, a product of the Land Cruiser’s big motor and bigger mass. 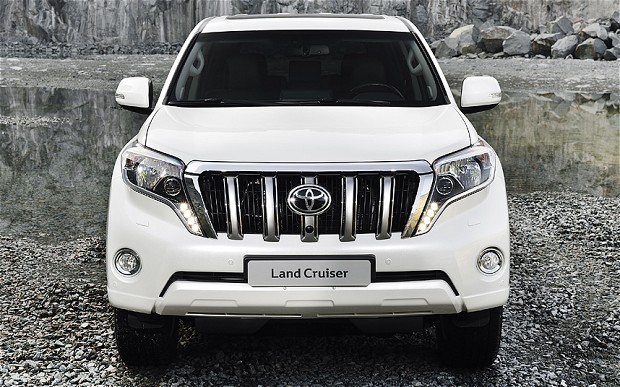 Helping the Land Cruiser to tackle the trails like a Jeep Wrangle are a host of off-road features including a full-time 4WD system with Active Traction Control (A-TRAC) and a fully lockable Torsen limited-slip center differential, crawl control and hill start assist control. Tow hooks and mud guards round out the compliment of off-roading equipment.

Inside, there’s the ambiance of old-world opulence: the seats and door panels are trimmed in soft leather, real-wood adorns the dash and steering wheel and fit-and-finish is impeccable. There’s room for seven passengers in the three rows of seats, and cupholders (12) and storage nooks abound.

The Upgrade package, once an extra-cost option, is now standard, a move that accounts for the Land Cruiser’s price increase for the latest model year. The package includes almost everything a luxury-focused buyer could want: a voice-activated DVD navigation system with an integrated backup camera, a six-disc CD changer, a rear-seat DVD entertainment system with a 9-inch display and two wireless headphones, multi-state second-row heated seats, a center console cooler box and headlamp cleaners.

For safety technology, the Land Cruiser has ten airbags: dual front, front-seat mounted, front and rear side curtain and front knee airbags, to be precise. Traction and stability control systems and, of course, ABS are also fitted, as are electronic brake-force distribution, brake assist and smart stop brake override technology.

Toyota’s Land Cruiser is primarily intended to serve the role of a rugged off roader more than the usual daily driven SUV, as such it competes with the platform-mate Lexus LX 570, BMW X5, and Volkswagen Touareg more than anything.