Automotive enthusiasts tend to obsess over spec sheets. How else could we know which cars and trucks are the quickest in a straight line, hold the road with the greatest tenacity, or tow the biggest trailers? More succinctly, what ammunition would we have in the seemingly endless back-and-forth of Internet forums if it weren’t for specifications? 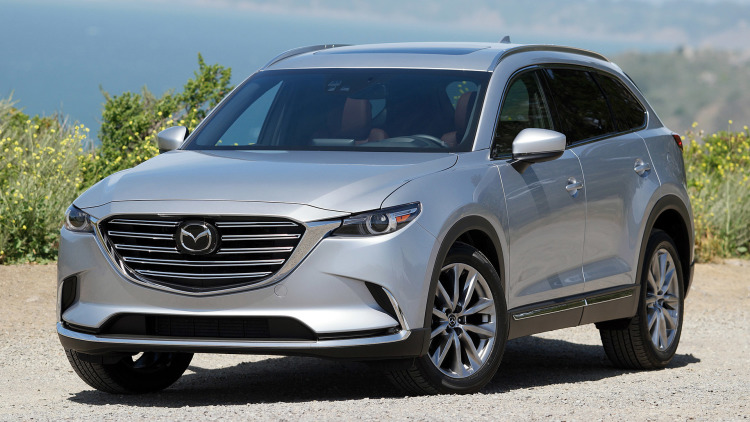 Mazda’s engineers think they’ve found a better way. The 2016 CX-9 has less horsepower than its primary competitors. The only engine available is a turbocharged four-cylinder, hooked to a six-speed automatic. Drivers won’t miss the 23 horsepower (or more, as we’ll soon explain) lost in the changeover from 2015 to 2016, because Mazda applied its holistic Skyactiv approach to the largest vehicle it offers. That means less weight and, ultimately, more fun. Or so they say.

Are they right? Yes. And no. Most of the time, in normal on-road driving conditions, the 2016 CX-9 is the most fun you can have with three rows. But the real-world tradeoff didn’t go off completely without a hitch.

We couldn’t accurately gauge fuel mileage during our short stint behind the wheel, but Mazda promises class-leading efficiency for actual owners on actual roads. It’s all part of vehicle development engineer Dave Coleman’s stated goal of “ignoring competitive specs and focusing on the real world.” Based on the inherent goodness of Mazda’s previous Skyactiv efforts, we have a feeling that’s more than just marketing bluster.

We can say for certain that the CX-9 beats its rivals when it comes to ride and handling. Mazda’s three-rowcrossover rides seriously smooth, even on broken pavement. It’s also quiet, thanks to thicker floorpan steel and an extra 53 pounds of sound deadening material compared to the previous CX-9. Still, the 2016 model is about 260 pounds lighter than the 2015.

Base 2016 CX-9s retail for $32,420, which is a few thousand dollars more expensive than the Explorer, Pilot, and Highlander. The previously top-level Grand Touring model starts at $41,070 (add $1,800 for all-wheel drive), and the new Signature trim level lists for $44,915 with standard all-wheel drive. That’s pretty much on par withToyota’s Limited Platinum grade, but undercuts Honda’s Elite trim and is even further from Ford’s $53,665 Explorer Platinum.

Mazda’s effort to throw out the spec sheet and design a large crossover that excels in the real world is laudable. And it mostly works, as long as you don’t stray too far outside its baked-in capabilities. The 2016 Mazda CX-9 is a crossover that’s built not for passengers, but for drivers; for people who need a utility vehicle but aren’t ready to give up the notion driving should be fun. And that’s an idea we can get behind.