Our first drive of the 2017 GMC Acadia was in the pouring rain in Washington, D.C., ending the day in a downpour so heavy you could barely see the car in front of you on the highway. The rain washed out the off-road track designed to show the mild capabilities of the All Terrain, the new two-row off-road addition to the family of three-row crossovers. 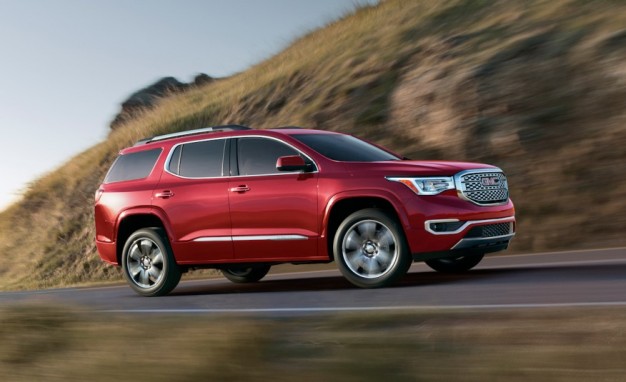 The conditions were in sharp contrast to our subsequent testing of the All Terrain in the high heat of California in August. The crossover underwent the usual battery of tests at the Auto Club Speedway in Fontana and then headed to Mojave to be put through the paces in triple-digit temperatures on a high-speed oval, a handling course, an off-road course, a gravel road, and a road loop covering a variety of surfaces.

With more information under our belts, we continue to enjoy the new platform that the Acadia shares with the Cadillac XT5, taking it from a full-size eight-passenger vehicle to a more midsize crossover that seats from five to seven, depending on the trim level. The All Terrain is the only two-row, five-passenger variant and enjoys ample back-seat room as a result, another feature we applaud.

But we bemoan some General Motors carryovers, including a somewhat dozy engine that was more apparent on our test surfaces, a transmission we wish was more responsive, and some old switchgear in an otherwise attractive interior.

Our test vehicle has a price tag of $47,465, and it pairs a 3.6-liter four-cylinder engine that generates 310 horsepower and 271 lb-ft of torque with a six-speed automatic transmission and standard all-wheel drive.

The new Acadia All Terrain is also faster than the 2017 Mazda CX-9 Signature, which took 7.4 seconds to go from 0 to 60 mph, or the Touring model, which took 7.5 seconds. And it beats the 2017 Toyota Highlander, which took 7.2 seconds to hit 60 mph and 15.5 seconds to do the quarter mile. But the Cadillac XT5, its platform sibling, posted better times with 6.4 seconds for the front-drive model and 6.5 seconds with all-wheel drive.

GMC’s certified fuel economy for the Acadia is 18/25 mpg in city/highway driving. Our testing found the All Terrain got 16.9 mph in the city and 24.4 mpg on the highway for a combined 19.6 mpg.

Moving to a new platform has given the Acadia a much better suspension and improved ride and handling. It sops up uneven surfaces with minimal head toss. Being smaller makes it more nimble and better able to grip the road. It has cruise control, but it does not hold its speed when accelerating down a hill.

Styling is true to the GMC brand. People won’t mistake this for a Chevy but may be confused by its new size. The interior is quite handsome with butterscotch seats and dash stitching, but the center stack shows continued raiding of the GM parts bin.

Because the All Terrain drops the third row, it is quite spacious. The second row now folds flat with the pull of a lever in the trunk to reveal a huge, flat load floor. There is ample trunk space with the rear seats up, as wellâspace that a third row eats up. We also like the twin sunroofs.

But for the buyer who wants some limited off-road capability and prefers extra room over a third row of seats, this is a good daily driver for whatever your lifestyle all seven days of the week.