When the 2017 Land Rover Discovery goes on sale in the United States around the end of May, it’ll mark the first time in years that JLR has offered the model here. At least, under that name. Since 2004, the model known elsewhere by that title has gone by LR3 and LR4,” names that were seemingly attempts to woo American and Canadian car buyers convinced that every fancy car needed an nonsensical alphanumeric name in order to be worth the money. 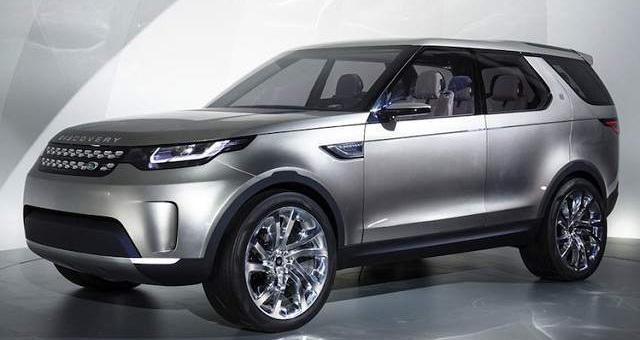 But unlike most of the premium car market, honest-to-God names are in at Land Rover these days, so the iconic Discovery moniker is back. Don’t go thinking this new Landie is a nostalgia trip, though. The car has been revamped from skeleton to skin, starting with a new aluminum chassis that shaves off hundreds of pounds compared to the LR4, cramming it full of the best technology the company has on hand, and finishing off with a whole new look inside and out.

The new Discovery is a monumental change in terms of styling

This picture says it all, doesn’t it?

Compared with the new-for-2017 model, every previous Discovery looks as thought it was designed by Braque.

In photographs, the new Discovery’s look can come across as a little bulbous and ungainly. The collection of sweeping curves and simple lines works far better in person, where this Land Rover seems less chubby and upright, and more muscular and imposing.

Forget everything you knew about how a Discovery drives

Previous versions of the Discovery were as ornery on-road as they were happy off it. Saddled with a heavily reinforced body-on-frame chassis, largely powered by underwhelming engines, and stuck with a coefficient of drag designed to make flying bricks feel better about their career choice, they were best left to the dirt tracks and secondary roads.

The new model, on the other hand, is a genuine delight on the street. The weight loss has done wonders for the Discovery in terms of acceleration and handling alike. It’s not hard to find the limit on tight turns, especially on the off-road tires my test car wore, but it reveals itself as gentle understeer, easily corrected with a stab at the brakes. It’s reminiscent of the Range Rover Sport, with which the new Disco shares a sizable portion of its aluminum chassis.

The diesel is the engine to get

Here in the United States, the 2017 Discovery will arrive with a choice of two six-cylinder engines: the 3.0-liter supercharged V-6 also found in almost every JLR product, and the 3.0-liter turbodiesel V-6 shared with the Range Rover and Range Rover Sport. There’s nothing wrong with the gas engine-it’s every bit as happy pushing around a Discovery as it is a Range Rover or an XJ-but the diesel proved itself a far better fit for the real world.

It was designed for modern families…including dogs

At the media launch, Land Rover pointed out early and often the ways the new Discovery was optimized for the family of the modern era. It’s laden with up to 9 USB plugs and as many as 6 12-volt outlets. The power-operated inner tailgate can hold up to 660 pounds, making it possible for even a family of three to plop their butts on it simultaneously to strip off their muddy boots-all while the giant tailgate above keeps them dry.

And since Land Rover owners apparently love to fulfill stereotypes and ride around with their large dogs in back, the company even developed a CAD model of one of the engineers’ Golden Retrievers while designing the car, to make sure there was enough room for even bigger pooches to move around and be comfortable behind the second row.

It can do everything you think it can, and then some-and it makes it foolproof

During my time with the car in the high desert of Utah and Arizona, Land Rover had me throw the new Discovery through no fewer than four separate off-road courses. The carmaker’s multinational army of representatives barely asked if I had any off-roading experience, provided a bare minimum of advice , and gave me more than enough room to make an ass out of myself. Not because they were irresponsible-because they were confident.

And by God, they were right to be. The new Discovery clawed its way up smooth rock faces most people couldn’t walk up, crawled down sand dunes steep as a double-black diamond ski trail, bounced through alpine trails with ground made of Play-Doh loam, and hauled ass down rutted dirt paths like a baby F-150 Raptor. Off-roading is never idiot-proof…but this Land Rover comes about as close as you can get.

The InControl system, for one, remains near the back of the infotainment pack. It’s a monumental improvement over the old version, but still falls short of the examples found in other high-end cars. Inputs were laggy, sometimes taking as long as a full second to respond to a touch. The system refused to play music through an iPhone connected via USB in more than one car. And the small, often-unintuitively placed buttons means navigating between the menus requires far too much attention. I wound up drifting into the other lane more than once while trying to change the radio station.

And all that’s on top of the Disco’s formidable physical off-road features, like 34º approach, 30º departure, and 27.5º tip-over-sideways angles (with the air suspension option), more than a foot and a half of wheel articulation, 11.1 inches of ground clearance, and the ability to forge through a hair’s breadth shy of three feet of water.