Some sacred cows in our industry are headed to slaughter. Take the notion of a model lifecycle. It used to be that an “all-new” model involved a brand-new platform wrapped in new styling, not sharing much if anything with the old one. That concept is dead, and rightly so. The 2017 Nissan Pathfinder is both the past and the future. 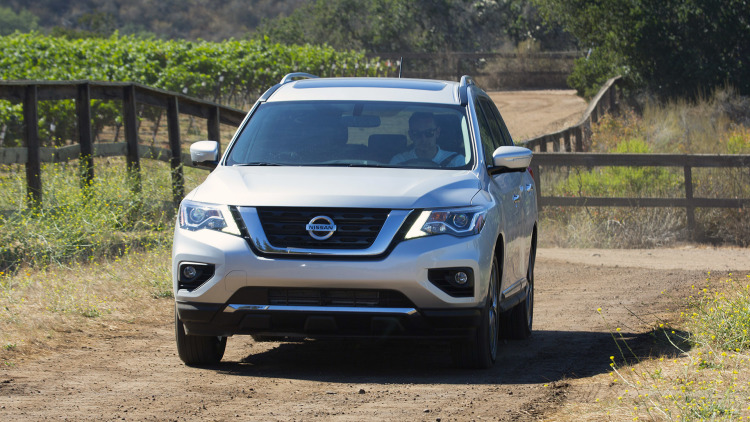 We went to Monterey, California, to drive the Pathfinder under an angry sun; a massive wildfire, burning a few miles away, rained down ash and filtered the daylight into a warm, orange glow. That fire stayed far away, but the scores of fire trucks rushing to the scene all throughout our drive route reminded us to put things in perspective.

Since we didn’t tow anything, the Pathfinder’s revised rating was hypothetical but not insubstantial: an increase of 1,000 pounds, from 5,000 pounds to 6,000 pounds. Nissan told us the increase was due to more available engine power and the addition of a transmission cooler. A hitch is standard on the Premium trim and optional on others. This is decent towing capacity for a crossover, and clearly Nissan is betting it can help keep some buyers with towing needs out of body-on-frame SUVs.

Yes, the Pathfinder has a CVT, a transmission type that doesn’t get high marks for feel or long-term reliability. But Nissan has been in the CVT game a long time, and the software that controls this Xtronic-branded unit is pretty much as good as it gets. It helps that the V6 has a generous amount of power, so in most situations revs stay low and the transmission can do its thing, simulating gear shifts at points that are familiar to a traditional automatic owner. Stomp on it and the revs come up as it scoots away, but things calm down as soon as you’ve reached the appointed velocity. This is a powertrain that feels competent and natural in this application, with few missteps.

And yes, power. The Pathfinder has it. The revised 3.5-liter V6 now makes 24 more horsepower and 19 lb-ft more torque, for a total of 284 hp and 259 lb-ft. That increase in power is due to the addition of direct injection, a revised cylinder bore coating process that replaces cast-iron liners, increased compression, and revised variable valve timing. Nissan wouldn’t talk 0–60-mph times, but let us say this: you don’t need any more engine than the 2017 Pathfinder provides for the freeway or around town. Towing a full load might be a different story, but we didn’t have an opportunity for that.

Inside, there are some new finishes and a slightly revised center console, and little else. The new 8.0-inch touch screen infotainment system is new to the Pathfinder and a first in a Nissan-badged vehicle, but it’s a hand-me-down from some Infiniti products. It’s fine, but the graphic interface looks similar to the outgoing system – that is to say, dated.

The horsepower bump is also nice, putting the Pathfinder mid-pack – there’s more juice on hand than either the Highlander or Pilot can offer, but two of the Explorer engines offer more power. No matter, it’ll out-tow them all, including the soon-to-be-replaced Chevrolet Traverse and the brand-new, downsized GMC Acadia.

If you can get by with less towing capacity, you have an embarrassment of options, and so it’s tough for the Nissan to stand out. But if you want the mild manners and conservative looks of an established player, and you just bought a bigger boat, the Pathfinder is worth a look.