Volvo took the wraps off the all-new S90 sedan today here in Gothenburg. Following the arrival of theXC90 crossover last year, the luxury sedan represents the next step in (and an essential part of) the Swedish automaker’s revitalization of its entire lineup. 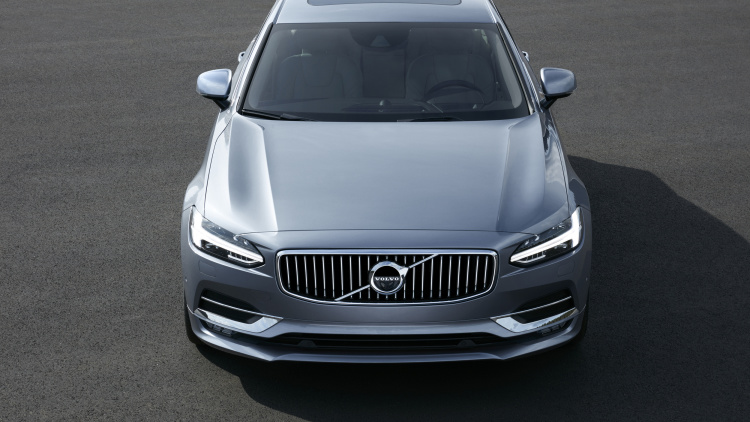 One look is all it should take to realize that this is a thoroughly fresh product. The design adopts the same language as the crossover, but in an inherently more elegant form, despite being based on the same Scalable Product Architecture as the XC90.The S90 promises all the latest technologies for which Volvo has become known, particularly in the area of safety equipment. Full details have yet to be announced, but Volvo promises “world-first safety technologies and highly advanced semi-autonomous features” as part of its Vision 2020 initiative to eliminate automotive casualties in its vehicles by the end of the decade. Meanwhile, the thoroughly fresh and emphatically Swedish interior is dominated by the oversized, tablet-like Sensus Connect touchscreen display to centralize auxiliary controls and minimize button clutter on the dashboard.Powertrain specifications are also still to follow, but Volvo has already indicated that the new S90 will be available with three engine options dubbed T5, T6, and T8. The Swedish automaker has long since moved on from the engine scheme that identified the cylinder-count in its name, but we’ll likely looking at three incremental versions of the same flexible new 2.0-liter inline four: T5 turbocharged for 240 horsepower, the T6 adding a supercharger for 302 hp, and the T8 throwing plug-in electric assist into the hybrid mix to deliver 400 hp.The new S90 represents Volvo’s assault on popular German rivals like the Audi A6, BMW 5 Series, and Mercedes E-Class. It also goes up against other Europeans like the Jaguar XF and Maserati Ghibli, as well as Japanese competitors (Acura RLX, Infiniti Q70, Lexus GS), and American entries (Cadillac CTS, Lincoln MKZ). That puts it in a crowded segment, and gives Volvo a more compelling entry than the decade-old S80 it replaces.Volvo clearly has big ambitions for the new S90, and is expected to follow up with a V90 wagon version as well (and if we all behave ourselves, maybe a two-door model, too). Much sooner than that, though, we’ll have live impressions and more details for you, so stay tuned. In the meantime you can view the official images in the gallery above and the limited details in the press release below.