After unleashing an onslaught of performance-oriented vehicles, including the Civic Type R plus sedan and coupe Si variants, Honda has just revealed a new microcar hot-hatch show car to the world: the Small RS concept. 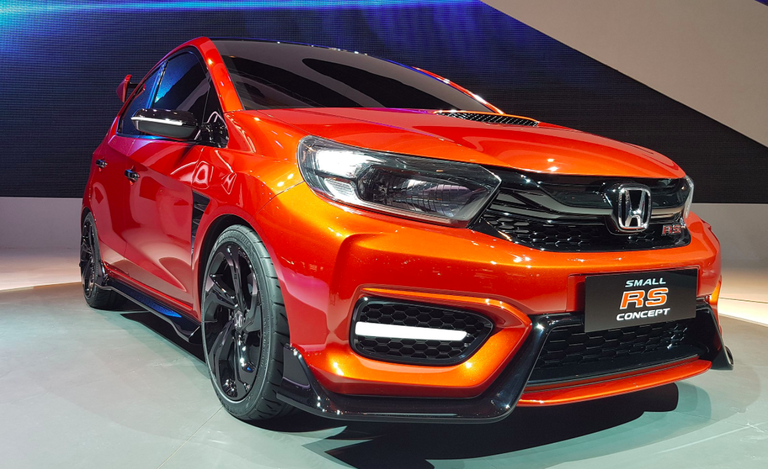 Although in-the-moment word association might direct the brain from the letters RS to the Ford Focus, Honda uses the designation on numerous sport-oriented vehicles in other countries. In Indonesia, Honda has a Jazz RS, a Brio RS, and a Mobilio RS already in the lineup. So it makes sense that the Small RS Concept made its first in-the-metal appearance at the Indonesia auto show in Jakarta, where it was displayed alongside an NSX GT3, the Civic Type R, a refreshed BR-V, and a special-edition Mobilio.

The RS concept was designed by Honda R&D Asia Pacific on Honda’s small-car platform. With its gaping mouth, angry headlights, hood scoop, and funky rear wing, it has us dreaming of a pocket-size Civic Type R, an association only enhanced by the bright-orange paint with contrasting black wheels, four doors, and hatchback form. We need this thing, and we needed it the day we were born.

In reality, it appears to preview the next generation of the aforementioned Brio city car, which is an Asia-market offering that’s one size smaller than a Fit (called Jazz in other markets), which has existed in its current generation since 2011 and must be due for a replacement soon. Unfortunately, there’s not much information on what makes this concept tick. The production 2018 Brio is driven by a 1.2-liter i-VTEC gas four-cylinder paired with a five-speed manual or automatic transmission or a continuously variable automatic (CVT).

The battle-ready exterior of the concept certainly suggests it has performance upgrades underneath, but there is no confirmation of that. Which is probably better for our mental health. We already have too many unhealthy unobtainable obsessions.