The Porsche Cayman GT4 Clubsport is a turnkey race car for track only, and it’s cool as heck. It comes race-ready and FIA-certified with all the appropriate safety equipment for racing. Our only complaint is that it’s not road legal. Otherwise, we can’t imagine it being any cooler. Or at least that’s how we felt until we saw Porsche Motorsport tweet photos of a new concept that takes the Cayman GT4 Clubsport into different territory. It’s a concept is bred for rally racing, and it has us all sorts of excited. 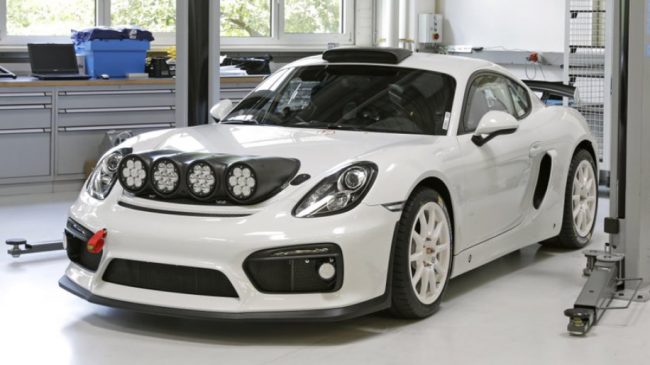 Porsche doesn’t give a lot of details about the car, but says it plans to bring it to WRC’s Rallye Deutschland next weekend to collect feedback from the community. It makes us think, hope, pray that Porsche is getting back into building rally cars and competing as a factory team.

From what we can see in the images Porsche posted, the Cayman GT4 Clubsport rally concept gets a set of rally lights on the hood, a roof scoop, skid plates to protect underbody and mechanicals, and a set of OMP nylon tow loops in the front and rear. It looks intimidating in white with white wheels wrapped in Michelin Pilot Sport rubber. Surely, there are a number of other tweaks and improvements we can’t see from these photos.

As it’s currently sold, the Porsche Cayman GT4 Clubsport is a rear-wheel-drive, single-seat (with fittings for a second, in case you need a co-driver) racer with a 385-horsepower 3.8-liter flat-six mated to an optimized six-speed PDK.

It’s not clear if Porsche will do more than display the car at Rallye Deutschland, but we really hope there’s some sort of moving demonstration to show off the goods. Either way, we’ll be keeping our ear to the ground to see how this develops.