Outdoors enthusiasts have turned to the Toyota 4Runner for three decades as the go-to, go-anywhere SUV that also excels as an everyday driver. The TRD Pro Series introduced for 2015 continues for 2016, underscoring the 4Runner’s off-road persona, and all models feature upgraded Entune multimedia systems. 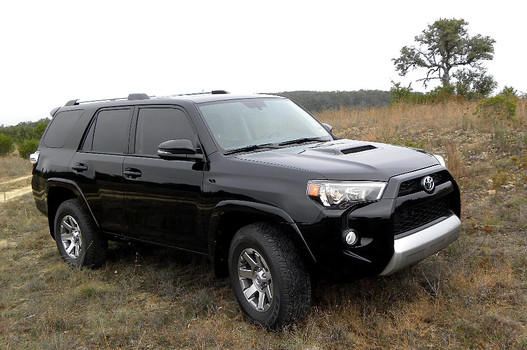 Whether the destination is a difficult-to-reach bike trail, a hidden access point for river rafting or simply a spectacular view, the Toyota 4Runner has been getting owners there for 30+ years. The current-generation model is the roomiest and most capable in its history and sacrifices none of its rugged function to deliver everyday comfort and versatility. The 4Runner really is the do-it-all SUV. Available third-row seats allow up to seven-passengers to experience great outdoor adventures.

For 2016, the 4Runner does it all again, this year while treating occupants to more functionality from upgraded Entune multimedia systems. In the SR5 and Trail models, the Entune Audio Plus with Connected Navigation (Scout® GPS Link) uses the customer’s smartphone to provide navigation functionality through the head unit. All Entune units are upgraded to 2.5 version status, which includes Siri® Eyes Free mode.

Toyota pioneered the crossover SUV and today offers two of the best — and best-selling — the compact RAV4 and midsize Highlander. That makes room for a full-capability SUV in the line, and the 4Runner excels in that role. It’s built with rugged body-on-frame construction featuring a 4-link rear axle and coil-spring suspension.

A wide choice of model grades appeal to a wide range of budgets and needs. The 4Runner is available as a well equipped SR5; SR5 Premium with additional amenities; Trail; Trail Premium; Limited, and, for the ultimate in off-road capability and style, the unique TRD Pro Series.

Rugged Styling, and the Hardware to Back It Up

Rugged looks alone won’t get you down the trail, but they’re sure a nice bonus. All 4Runners come equipped with projector beam headlights and LED rear combination lamps. The SR5, Trail and TRD Pro ride on 17-inch alloy wheels and, all 4Runner models come with a full-size spare tire. The Trail model takes muscular design to a higher plateau with color-keyed bumpers and overfenders, aggressive looking hood scoop and silver painted front and rear bumper accents.

On any Toyota, the Limited grade stands apart with upscale trim, and that’s also the case for the 4Runner. It’s the only 4Runner with a chrome-plated grille insert, and its chrome front bumper trim extends to the foglamp bezels. The side molding and rear bumper are also chrome trimmed. The 20-inch machine-finished wheels are another Limited-exclusive feature.

Engineered to Take What You Can Dish Out

The 4Runner’s 4.0-liter V6 cranks out 270 horsepower at 5,600 rpm and 278 lb.-ft. of torque at 4,400 rpm, so it’ll move this roomy SUV with authority. Dual Independent Variable Valve Timing with intelligence (VVT-i) optimizes torque across the engine’s operating range. There’s plenty of grunt for towing, and Toyota makes the task easier by equipping the 4Runner with a standard integrated tow-hitch receiver and wiring harness. The 4Runner can tow a trailer up to 5,000 pounds, with a 470-pound tongue weight.

The 4Runner SR5 2WD will do the job for many customers thanks to an Automatic Limited Slip Differential (Auto LSD) feature, a function of the traction control (TRAC) that allows some degree of wheel slippage to help the vehicle dig out from sand or snow, for example. The available part-time 4WD system uses Active Traction Control (A-TRAC) and bolsters off-road capability with a two-speed transfer case with low-range. By distributing drive force to any one wheel in contact with the ground, A-TRAC can make terrain irregularities and slippery patches virtually transparent to the driver.

The tough chassis and 4WD get help from a full supporting cast of technologies. Standard Hill-start Assist Control (HAC) provides additional control when accelerating from a stop up a steep incline by helping to hold the vehicle stationary while the driver transitions from the brake pedal to the accelerator. Limited and SR5 models equipped with 4WD also feature standard Downhill Assist Control (DAC). This feature augments low-speed descending controllability by helping to maintain a constant slow speed and preventing wheel lockup, allowing the driver to concentrate primarily on steering.

The 4Runner Trail grade (and TRD Pro) lives up to its name by adding the capability of an electronic-locking rear differential and Toyota’s Crawl Control (CRAWL) feature. The latter helps maintain a constant speed, enhancing vehicle control when driving up and over obstacles in challenging off-road situations. With the transfer case shifted into low range, CRAWL regulates both engine speed and braking force to propel the vehicle forward or in reverse at one of the five driver-selectable low-speed settings. The driver can thus focus on steering over obstacles without having to also modulate the throttle or brake pedal.

As conditions on the trail change, the 4Runner Trail grade driver can adapt the vehicle with the Multi-Terrain Select system. A dial is used to select the mode that matches prevailing terrain and conditions, adjusting wheel slip accordingly. For example, on loose terrain such as mud and sand, more-than-normal wheel slip is permitted, allowing wheel-spin to work in the vehicle’s favor. The Mogul setting is for any extremely uneven terrain, such as V-ditches, slopes, and ridges — uphill or down. In this mode, wheel slip is minimized and the system acts more like a limited slip differential. On the 4Runner Trail, an overhead console groups the off-road control switches into one location.

The Limited adds comfort through the standard and exclusive X-REAS suspension, which automatically adjusts the damping force of shocks when driving over bumpy surfaces or when cornering. A center control absorber cross-links the shock absorbers on opposite corners of the vehicle, substantially reducing pitch and yaw by offsetting opposing inputs.

The Toyota 4Runner is the Sherpa of SUVs. With the second-row seats in use, the cargo area offers up to 47.2 cu. ft. of carrying space. If it’s just two people hitting the road or trail for an extended getaway, folding the second row opens up a cavernous 89.7 cu. ft. cargo area. Fold-flat second-row seats provide a level load floor, and it’s not necessary to remove the headrests to fold the seats flat. The available pull-out cargo deck can carry up to 440 pounds to make loading and unloading heavy items easier, and it also provides seating for tailgating and campsite relaxation. For power on the go, the 4Runner offers a standard 120V outlet and two 12V outlets.

Third-row seating is available on SR5 and Limited grades, with a split 50/50 seat that folds flat. When so equipped, the 40/20/40 second-row seat has a one-touch walk-in function to provide easy access to the third row. The seats can be folded from the side or at the rear, using separate one-touch levers. Even when “roughing it” there’s no need to give up comfort; the second-row seats, which include a center armrest, individually recline up to 16 degrees in four steps.

Air conditioning with rear seat vents and pollen filter, power-sliding liftgate window, and a backup camera are among the standard features that make the 4Runner SR5 an outstanding value. The standard Optitron® instrument panel adds a touch of high-tech elegance for all grades, and a multi-information display provides readouts for numerous vehicle functions and fuel economy.