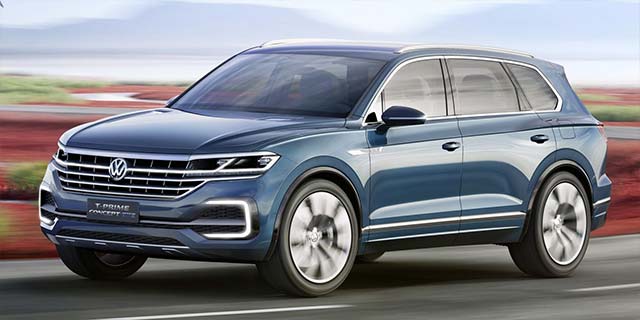 The T-Prime Concept GTE is a full-size sport utility vehicle with a plug-in hybrid powertrain and all-wheel drive. Volkswagen’s new Curved Interaction Area is a completely new digital display and control concept. The innovative curved infotainment display merges with the interactive displays and controls, resulting in a new human-machine interface (HMI) that is intuitive, precise, and fun-to-use.

This SUV show car combines the best of many automotive worlds: the comfort and spaciousness of a saloon, the superior traction of an off-road vehicle, the agility of a sport sedan and—thanks to innovative drive technologies—the efficiency of a compact car.

In the future, Volkswagen wants to offer an exciting SUV in every relevant market segment. The product campaign starts this Spring with the global market launch of the new Tiguan which will also be offered with an extended wheelbase in certain markets. Following in car classes above it are a new mid-size SUV (for the USA and China), the successful Touareg and a vehicle in the style of the T-Prime Concept GTE. Beneath the Tiguan, two new SUV model series will make their debut simultaneously: in the Golf class, there will be an SUV inspired by the T-Roc concept, and the T-Cross Breeze that was presented in Geneva shows the direction that will be taken in the Polo class (SUV).

SUVs are booming worldwide, and this is especially true in the segment of the large C-SUVs to which the T-Prime Concept GTE belongs. Forecasts for China predict 18 percent growth between 2017 and 2023; in Europe and Russia growth might even reach 26 percent. Around the globe, annual volume of the exclusive SUVs will reach the milestone of two million unit sales around 2020. With the new T-Prime Concept GTE, Volkswagen is now responding to this trend by introducing one of the most advanced cars in the world.

The concept vehicle’s progressive interior reflects the desire for the digital capabilities of a new era. It is, simply put, a lot of fun to have a world of displays and controls that consist exclusively of touchscreens, gesture and voice control, touch-sensitive surfaces and shifting “by wire” that can always be used intuitively. The Active Info Display (interactive, digital instruments) and the screen of the infotainment system, which is curved for the first time in a vehicle, meld in the T-Prime Concept GTE to form the Curved Interaction Area—a multifunctional and interactive display landscape.

The T-Prime Concept GTE is powered by a 375 horsepower plug-in hybrid drive, incorporating an electric motor, turbocharged gas engine, and battery, which can charge externally or during the drive. With a sufficiently charged battery (14.1 kWh energy capacity) this SUV—like all Volkswagen GTE cars—always starts in the practically silent electric E-Mode.

It permits up to 31 miles of zero-emission driving in metropolitan areas. GTE mode forms an efficient alliance between the electric motor that is integrated into the housing of the 8-speed automatic gearbox and the 2.0-liter four-cylinder turbo engine (TSI®). The electric motor develops a power of 134 hp and a maximum torque of 258 lb-ft; the TSI has an output of 248 hp and 273 lb-ft. In boosted GTE mode (kickdown), the full system power and an impressive 516 lb-ft of system torque are available.

The T-Prime Concept GTE is equipped with 4MOTION® permanent all-wheel drive, which distributes power to the front and rear wheels via the limited-slip differential, which is also integrated into the 8-speed automatic gearbox.

In hybrid operation, such as when the high-voltage battery is flat, fuel consumption is 29 mpg in combined mode using energy from the charged battery, the combined fuel consumption in the NEDC cycle for plug-in hybrid models is 87 mpg. In GTE mode, the T-Prime Concept GTE accelerates to 60 in 6.0 seconds and has a top speed of 139 mph.

There are two different ways to externally charge the lithium-ion battery of the T-Prime Concept GTE. In the conventional solution, the charging cable is plugged into a 220-volt outlet. From a completely flat state, the battery will fully charge at a charging power of 3.6 kW in eight hours. It is also possible to “fuel up” at public charging stations at a power of 7.2 kW. Then the battery is fully charged after just two hours and 30 minutes.

The T-Prime Concept GTE can be driven in three different drive modes: E-Mode, Hybrid, and GTE. The system is designed so that the drive utilizes battery energy first, and so it starts off in E-Mode. While driving in E-Mode, the driver can intentionally activate the TSI and therefore the Hybrid mode by pressing the accelerator pedal beyond a defined pressure point. The driver can return to the zero-emission E-Mode via touchscreen at any time (provided that the battery still has sufficient charge); in this case, the all-wheel drive is also active. The GTE mode can also be activated via touchscreen. The driver brings out the most agile character of the SUV in this mode. The accelerator pedal, gearbox and steering characteristics are now even sportier.