On occasion, we journalists are allowed to step through the virtual time machine and sample a manufacturer’s greatest hits of yesteryear. You’ve seen the stories: new M3 versus BMW’s museum-piece E30 original! Well, Honda has its own collection – mostly regular old cars that should’ve been beat to hell long ago, but instead are sitting there in showroom condition. There’s a teal ’90 Accord wagon with dope plastic wheel covers with my name all over it. 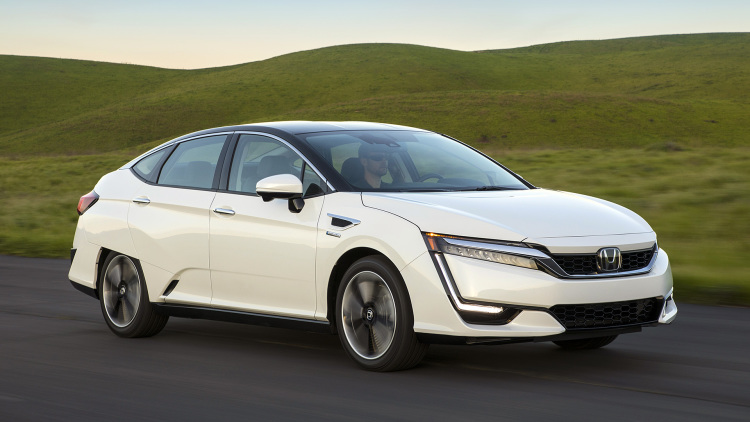 But today, that time machine’s going the other way. Sure, the headline and badge reads 2017 Honda Clarity, but it sure as heck looks, feels, and drives like a 2022 Honda Accord. The dimensions would be consistent with a next-next-generation midsize sedan, the look is familiar but evolutionarily advanced, and the cabin is different enough without being concept-car kooky. Oh yeah, and it’s powered by hydrogen.

That’s obviously its most futuristic element, but Honda’s latest hydrogen fuel cell powertrain is also why the Clarity feels less like a low-volume science project of today and more like a regular car beamed in from tomorrow. Get behind the wheel and it accelerates like an electric car with no weird noises or sensations. The steering, the brakes, and the handling in general are Accord normal. Look around the cabin and you’ll see five seats uncompromised by odd bulges disguising powertrain components. Much as the real cars of 2015 didn’t fly, the ones from 2022 aren’t likely to be that different, either.

Acknowledged, Commander, good to know. But that technobabble ultimately describes one of the many enhancements developed for the new Fuel Cell Voltage Control Unit, or FCVCU, which together allows for the new Clarity’s packaging improvement and increased normalness. You see, the old electric motor, gearbox, and power control unit might have been under the hood, but the fuel cell was located vertically between the front seats. This, paired with a giant hydrogen tank in the trunk, meant that the car’s passenger compartment and general usability were compromised by its powertrain of tomorrow.

Now, not so much. All of the componentry that was previously under the hood has been tilted forward 90 degrees, allowing for the new, more compact fuel cell to be sandwiched horizontally between it and that new FCVCU above. Altogether, it’s roughly the same size as an Accord’s V6 powertrain, and although the small lithium-ion battery pack technically still resides under the front seats, the cabin is no longer compromised. The driving position is at a normal height, there’s a regular center console boasting Honda’s usual clever packaging, and importantly, there are five seats, rather than the four provided by the previous Clarity and the Toyota Mirai.

To put that into the only perspective possible, a Toyota Mirai is $349 per month with $2,499 due at signing and a 12,000-mile limit. You get the same free hydrogen and tax rebate. After driving both cars back-to-back, the Clarity’s price premium seems to be worth it. Not only is it more normal to drive, it’s also bigger and can go further on a tank(s) of hydrogen (366 miles versus 312).

But then there’s the entire matter of hydrogen itself, and we’re not even talking about the restricted supply – there are actually plenty of stations now in Northern and Southern California. No, since we can’t just pop over to Jupiter and fill up a tanker, we have to separate H2 from another substance, say, natural gas or water. That takes a lot of energy. You’re effectively using electricity to split water into hydrogen and oxygen, then using that same hydrogen to create electricity and water again.

Taking that original electricity and putting it into an EV’s battery pack sure seems more efficient. Honda would argue, however, that hydrogen provides an ownership experience more akin to what we’re used to with gasoline – specifically, three-to-five-minute fill-ups versus waiting at a Chili’s for a half hour as your Tesla supercharges – while being cleaner and less reliant on foreign sources than gasoline.

Valid points to be sure, but just to hedge its bets, Honda will be releasing a Clarity EV and Clarity Plug-In Hybrid later in the year. Those will certainly find more homes than the Clarity Fuel Cell Vehicle, and although they won’t have quite the same made-in-2022 driving experience, they’ll nevertheless retain the same premium feel, uncompromised cabin, and Accord-of-the-future looks (although the aerodynamic wheel slats do give the rear view an almost 1950s retro quality). In other words, you won’t need hydrogen to sample the greatest hits of tomorrow.