Round 7 of the SUPER GT was held on October 5th (Sun) in Buriram, Thailand, at the Chang International Circuit (1 lap = 4.554km) and the #24 D’station ADVAN GT-R (Michael Krumm / Daiki Sasaki), starting the race from 2nd place, went on to finish in 2nd while the 10th qualifying #12 CALSONIC IMPUL GT-R (Hironobu Yasuda / Joao Paulo De Oliveira) finished 3rd, bringing both GT-Rs up to the podium. 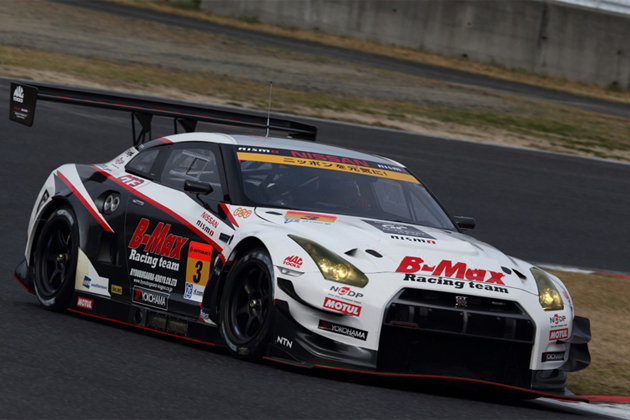 The #23 MOTUL AUTECH GT-R (Tsugio Matsuda / Ronnie Quintarelli) went into this race as the championship ranking leader and started from a qualified 3rd place on the grid. However, due to time lost in the pits and a drive through penalty being handed down for making contact with a GT300 car, it unfortunately fell down the order. To add insult to injury, at the first corner of the last lap it became entangled with another machine that caused it to spin out and finish the race in 10th. As a result it has dropped down the championship rankings to 3rd with a 6-point difference and this means that to become the series champion they must take 1st in the last round on November 16th (Twin Ring Motegi). On the other hand, the #12 GT-R which finished this race in 3rd, is now ranked 4th with a 7-point difference, meaning they will head into the final round with a chance at taking the championship.

This SUPER GT race, the first large scale event to be held at the Chang International Circuit, kicked off under cloudy skies and with a light breeze blowing in the air. When the race began at 3pm the temperature was 31°C. Compared to the previous day the conditions felt a little bit easier to bear. Taking the lead in the opening stages of the race was the #46 S Road MOLA GT-R (Satoshi Motoyama / Masataka Yanagida) which ran with the momentum it displayed on the first day’s practice runs (Fri) to secure pole position for the final race. The #24 also fell into a fine rhythm and the GT-Rs were maintaining a 1-2 alignment. However, after this the race would undergo a significant turnabout. The #24 GT-R began to fall back through the pack due to gearshift issues and the #46, which had been running in the lead, suddenly lost speed at lap 48. The machine pitted and was brought into the garage but unfortunately, due to engine trouble, would not come back out again in this race. On the other hand, the #12 GT-R, which qualified 10th, began to gradually climb through the pack and by lap 55 was hot on the heels of the #24 GT-R in 3rd. For the next few laps the two would battle it out. After this the #24 rose to 2nd place and went on to further make attempts at the leading #36 LEXUS RC F but couldn’t quite reduce the 2 second difference and ultimately passed the checkered flag in 2nd.

In the GT300 class, the #3 B-MAX NDDP GT-R (Kazuki Hoshino / Lucas Ordonez), which had secured 2nd place on the grid in qualification, began the race with Hoshino behind the wheel. Glued behind the leading #99 Porsche, he maintained 2nd place at a pace that the competition could not match. After the baton was passed at the lap 31, Ordonez also went on to form a good rhythm and zealously pursued the leading #99 Porsche. Then, seizing the opportunity when the Porsche made an irregular pit stop at lap 46, he moved into the top position and carried out a superb run right until the finish. With this the #3 grabbed its first win of the season. This is also the first series win for Lucas Ordonez who is challenging the SUPER GT this season through the Nismo Global Driver Exchange Program.

“We were so close. I have to say it’s a little disappointing. Before the race I felt we could win but I wasn’t under any illusion that winning would be easy. Still, it would be great if we could perform like this in every race. The car had transmission trouble in the middle of the race and we lost more that 10 seconds. After that we had to make an emergency pit stop. Yet, even after this, the drivers and the tires really worked hard. If we had just had a few more laps we could’ve grabbed the lead. The machine performed superbly. It was particularly on form when weaving through traffic. It seems the air conditioning stopped working at the final stages so we’ll have to apologize to Daiki.”

“There were two things that I was worried about before the race. Would the tires hold out until the end of the race and would the brakes be up to the task. However, both the drivers did a fantastic job controlling the car and conserved both these aspects. This was a first time course for everyone so it was a huge opportunity for our exceptional drivers and crew. Regarding the seemingly overwhelming speed of the #99, I told the drivers not to worry about it and just focus on their own race. The NISSAN GT-R NISMO GT3’s exceptional performance is what got us victory today. The team will be able to go into next year’s season knowing it has recorded a good result.”