Ford Performance Chief Engineer Jamal Hameedi was in China when he received an interesting text. Half a world away his team was shaking down the newest Shelby Mustang at Grattan Raceway in rural Michigan. The news was encouraging. The GT350R was keeping pace with a Porsche 911 GT3, even nosing ahead of it during time trials, while the GT350 was running about even with a 911 Carrera S and a Chevy Corvette Stingray. 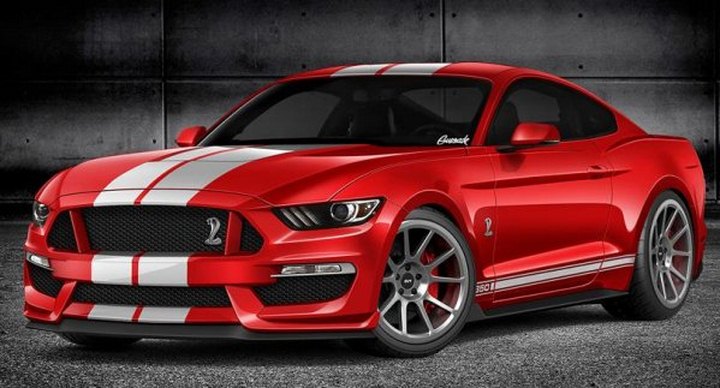 “That was a good text to get,” he recounted a week later as we chatted alongside the track at Grattan. On this scorching summer day, there were no Porsches or Stingrays to be found, but we’ve come to preview the track-focused GT350R. Ford drivers are at the wheel, and we’re riding shotgun. After several hot laps, we’re left with a predictable observation: The GT350R is wicked fast and quick as hell.

Much of this is thanks to the 5.2-liter flat-plane crank V8 that pumps out 526 horsepower and 429 pound-feet of torque. It’s the most powerful naturally aspirated road-legal engine in Ford’s 112-year history. To help the engineering process, Ford bought a Ferrari 458 Italia and ripped apart its V8. The GT350’s engine ended up being 10 pounds lighter. For the coup d’grace, Ford’s mill also revs to a Ferrari-like 8,250 rpm.

As formidable as all of that looks on paper, it sounds even more imposing in real life (see the related video below). The engine in our GT350R crackles, growls, and opens up to a flat-out roar as we explode onto the track, gripping the door pulls to calm our nerves. Grattan is a challenging, twisty course. The corners are tight, and the elevation changes quickly. At one point, our test driver aggressively tackles a curve and we’re briefly airborne. During the first stint, we reach about 140 miles per hour.

But the GT350R isn’t about straight-line speed or pure power. It’s designed to get around a track as rapidly as possible. That means Ford took the ‘base’ GT350 – which should be more than at home on the track itself – and re-tuned the suspension and aerodynamics. There’s a larger front splitter and rear carbon-fiber spoiler. The 19-inch carbon-fiber wheels are stiffer and lighter than comparable aluminum rollers, and they’re wrapped in Michelin Pilot Sport Cup 2 high performance rubber. Additionally, Ford ripped out the back seats, air conditioning, trunk floorboard, stereo, backup camera, and anything else that wasn’t necessary. Buyers looking for a slightly softer experience can opt for the electronics package, which adds some of this stuff back. In its most basic form, the GT350R weighs 3,650 pounds, which is 130 pounds less than the GT350 equipped with the track pack.

Our test car has air conditioning and a fancy touchscreen, but otherwise this pre-production model is indeed raw. We even pass on lunch (though Ford has a massive grill going) until after our track time is done. Like the smell of BBQ that drifts toward the track, riding in the GT350R only whets our appetite. We can’t wait to drive it, and as this brief preview demonstrates, it should be worth the wait.