Lotus can’t stop making track-ready special edition cars. We drove one of its latest examples, the Elise Cup 250, back in July. Of course, it was fantastic. Today Lotus added an even more hardcore Elise to the lineup to celebrate its upcoming 70th anniversary. Of course, it won’t be sold in the U.S. 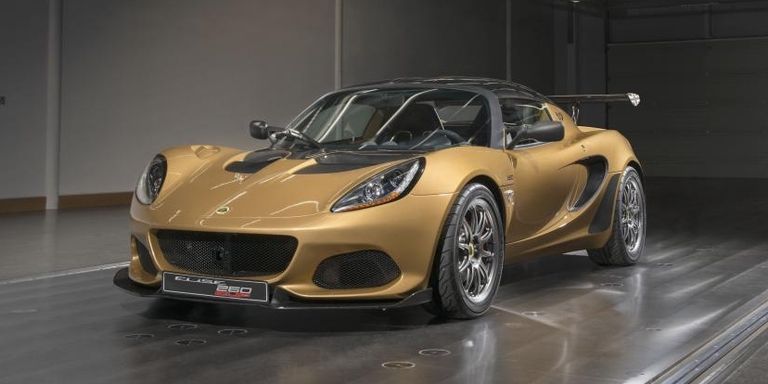 The Elise Cup 260 is an evolution of the 250, using carbon fiber parts and polycarbonate backlight glass to shave nearly 150 pounds for a dry weight of just 1900 pounds. Output from the Toyota-sourced supercharged four-cylinder grows slightly to 250 horsepower due to new induction components and revised calibration. Power is sent to the road via a six-speed manual gearbox.

Downforce improves 44 percent thanks to louvered front wheel arch vents, a bigger rear wing, a redesigned front clamshell, a carbon fiber splitter, and a bigger diffuser. At the car’s top speed of 151 mph, it produces an impressive 397 pounds of downforce. The Cup 260 is a tenth faster to 60 mph, clocking in a time of 3.8 seconds.

The Championship Gold paint seen here has been added to the color palate to celebrate the company’s upcoming 70th anniversary. According to Lotus, the color can be ordered on any of its lineup from November on.

Only 30 examples of the Cup 260 will be built. It’s a shame that it won’t make it to the US, but don’t worry too much. The next Elise should be coming, and knowing Lotus, it’ll be just as fun as ever.