Marussia is the latest casualty in a long line of financially troubled Formula One teams. The team was absent from the United States Grand Prix in Austin, prevented from participating due to budget constraints. Shortly after the race the team would collapse, guaranteeing a 20-car grid for the upcoming F1 season. The financial state of Caterham, could if the situation does not improve make it an 18 car grid. Even second ranked Lotus has had to become innovative to stay afloat. When the second ranked team is struggling financially, the sport has bigger problems. In short it has become too expensive. It is no wonder teams struggle to raise enough funds from sponsors to cover their costs. Top ranked Red Bull Racing shelled out $13.5 million per race to keep the team on the road. An estimated 10% of that price tag goes directly to the purchase and maintenance of 8 engines for each driver. 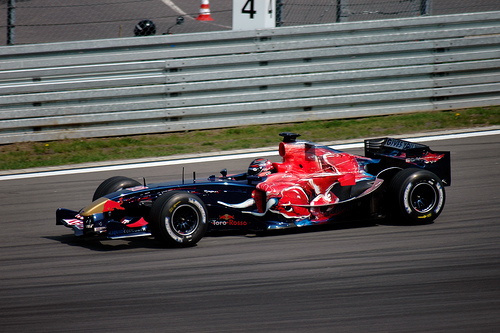 The niche following of Formula One racing means teams must always be on the lookout for new ways to raise finances. Especially with innovation and changes to the cars continuing to drive the costs of operating cars ever higher.

These cost pressures have led to teams devising innovative solutions to pay their bills. Controversially this has included the practice of selling the drivers seat in the Formula One cars to so called pay drivers. These drivers are causing a fair bit of controversy as they have displaced professional drivers. While some of the pay drivers are rising up the grid, they do not inspire the same interest or feelings in fans the professional drivers do.The second aspect of Formula One’s innovation is there a new eco friendly 1.6 litre V6 engine debuting next season. For cash strapped teams this is yet another cost they must absorb, at a time when they can lease afford to pay for such changes.

Similar to any other business problem, solving the conundrum of Formula One’s budget issues is going to take leadership from management. Absent this leadership there will be a continued decline in the financial health of the F1 teams, and more of them will certainly close up shop.It has been suggested much of the problem lies in management’s failure to broaden the appeal of the sport. Attendance numbers in some parts of the world, like the infamous Canadian Grand Prix, cancelled for the 2009 season due to a lack of a sponsor. The same problem recurred again in Abu Dhabi and India this past year; both of those events went ahead but were poorly attended.

One major step management and the teams could take would be to work harder to bring more young drivers into Formula One. Investing in the next generation of drivers by providing opportunities to these drivers will broaden the appeal of the sport to a younger generation. This in turn will help to increase sponsor revenues and revitalise the ailing F1 teams. A cost cap was very close to be introduced by former FIA president Max Mosley and this would have been a great way of cost saving if it had been implemented. Here is a bio of Max Mosley so you can learn about the man that wanted this implemented and the life and times of a founding force in F1.