Food truck favourites like homemade burgers, fries, and Tex-Mex style burritos have returned to street corners and festivals all over the world. Whether the venue headliner is a modern day rock band, or a secret family recipe –food trucks are capable once again to draw crowds with or without a leading act to follow. 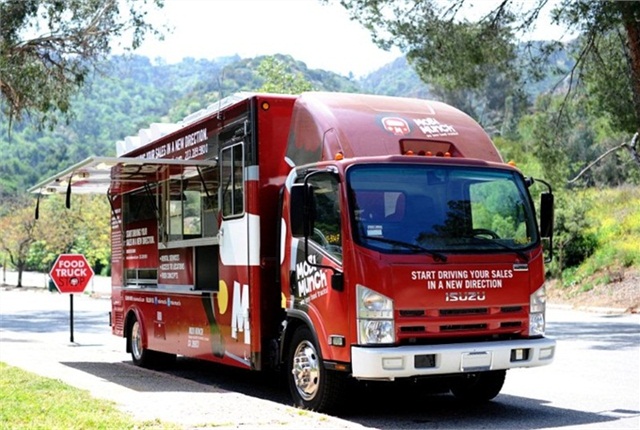 And not without fierce competition; food truck sales have sky-rocketed in recent years, as this trend continues to rebound back into popular appreciation. With all the recent hype surrounding food trucks, we decided to look back and put together a little history lesson.

History later reports another chuck wagon was established and popularized in 1866 by rancher Charles Goodnight. On massive cattle-drives, Goodnight would prepare an army surplus wagon with all the goods to create the first modern kitchen on wheels.

It was equipped with all the pots, pans, and cooking necessities to make for good eating –smoked meat, fried beans, and a range of easy to preserve food items that were prepared in advance. The cowboys who dined on the first chuck wagon gave it its name, for “chuck” was slang terminology for a good, “stick to your ribs”, hearty kind of food.

Coinciding with Charles Goodnight’s chuck wagon, early reports of popular food trucks also come from the cities of New England, where they provided sustenance for the blue collar workers of the time.

As time progressed, these trucks became more and more an important part of the cultural tapestry. With the devastating recession of the 1930’s and 1940’s, demand for food trucks and truck jobs continued to grow.

And it wasn’t just demand that inspired more food trucks –it was an early “start-up” boom created by out of work chefs that helped buck the trend. That’s right: Start-up culture isn’t new, either. The original start-up culture began in the food industry, not at Apple Computers.

Today, food trucks aren’t limited to the adventurous minds within the coastal cities they first appeared in; they also operate in urban, suburban, and rural areas across the country. Influential cities that have really popularized the food truck once again include LA, Chicago, Hamilton, Toronto, Miami, San Francisco, Houston and New York.

Although society only began to take note of food trucks in the 1800’s, they’re a historical relic, predating modern society by thousands of years. As early on as people could cook, they were doing so along the side of an intersection feeding the home sick and travel-weary. And as with bell bottoms and horn rimmed glasses, what is old is new again.

A New Take on a Simple Idea

Today it needn’t take much more than a little business know-how, and a wicked talent for cooking to make it in the food truck world. If you’ve got a clearly identified brand identity and demographic you aim to serve, the proof is in the pudding, so to speak.

The recipe for success lay in the ability to identify what is missing in your local geography, and successfully popularized elsewhere. If you can do that, you’re cookin’.