When the Toyota Prius was first introduced in 1997, not many took a lot of notice. It was a dream and a concept. A great one at that, but not many were convinced it had a wide-scale practical use. The Prius took a few years to get off the ground. The launch in 1997 was limited to the Japanese market only. It wasn’t until 2000 that it was released in the USA. Even then, most predict that Toyota didn’t make a single penny for another ten years. 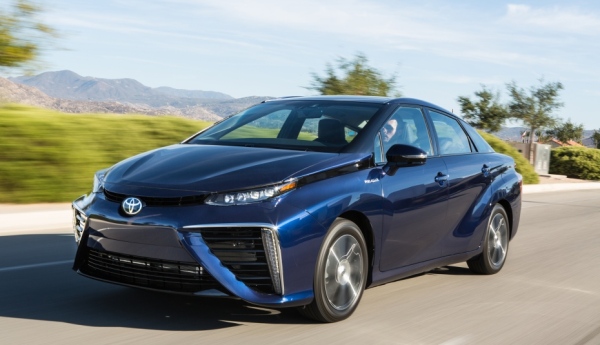 It took a long time for the global shift in consumer attitude to come around. The Toyota Prius proposed a major, fundamental shift in driving. That was hard to swallow for a lot of drivers. 14 years down the line, however, and the hybrid engine has taken over. The race to produce the very best hybrid is well and truly on. Even the gas guzzling SUVs and supercars are developing hybrid engines.

The Toyota Prius changed the entire motoring industry. It shaped the way consumers thought about driving and the environment. It helped governments change the way they assigned road tax and wrote laws. It took a long time, but the Prius changed driving.

Now, Toyota claims it has the next generation. They have unveiled the Toyota Mirai, which some lucky drivers can already test. Toyota’s head of operations, Rob Carter has made the bold claim that it will be as big as the Prius. By this he means that Toyota will change driving (again) with this new car. The Mirai is an entirely electric car. It removes the need for fuel and gas entirely. Instead it uses hydrogen fuel cells to power the electric motor.

Whispers of hydrogen fuel cell technology have swept the motoring world for a while. Theoretically, they are greener and more efficient than hybrid cars. Many have called them the future of driving. In this scenario, hybrid cars are simply the stepping stone to an even greener future. You see, hybrid cars still require a traditional combustion engine. They still fill up with fuel from petrol stations and they still burn gas. Hybrids are a great step in the right direction, but still rely on fossil fuels.

Hydrogen fuel cell technology, on the other hand, eliminates the need for petrol stations. Instead of gas, you would pour hydrogen into the tank. A chemical reaction then takes place in the motor. The hydrogen atom is split, isolating the electron. These electrons are then sent to the motor to power it. For those who forgot their school science lessons, electricity is nothing more than a flow of electrons. The remaining hydrogen atom then combines with oxygen in the air to form water. The water is then ejected from the exhaust pipe. The only emissions from a hydrogen fuel cell car is this water.

That makes it the cleanest power process to ever take place within a car. The Toyota Mirai is one of the first cars to be produced widely with this technology. It will do an impressive 300 miles on a single tank of hydrogen. It will also have the power and speed of a traditional car. It trumps electric cars by refilling in less than five minutes. Sounds great, doesn’t it? Perhaps its time to sell the Prius on Scotlandcarbuyer.co.uk and put your name down for a Mirai. Buyers should be lining up for the new model. However, this isn’t quite the case. It actually has a big uphill battle on its hands.

In one sense, you could argue that Toyota has already done the hard work. They have turned the world around on green cars. In one of the most competitive industries in the world, they convinced car companies to change their structure. Not only that but they changed the way governments and the general public think about driving. That gives them the platform they need to introduce the next step. People are already thinking environmentally, that much is true.

However, getting people to buy a hydrogen fuel cell car is an enormous ask. The Prius worked within the existing driving infrastructure and the benefit was obvious. You still fueled the car up at petrol stations. Once you did, you drove much further without fueling up. You saved a lot of money this way.

With the Mirai, Toyota are asking the public to buy a car that is not yet supported by infrastructure. When was the last time you drove past a hydrogen filling station? Government initiatives are underway to build more. But, even then, they will be few and far between. Toyota now have the hardest task of all. They need to convince third parties of the importance of hydrogen fuel cell technology. They need to convince suppliers to invest in hydrogen filling stations. They need to convince governments to pour even more money into the infrastructure. Toyota themselves are investing a lot of money here. They have partnered with Air Liquide to provide 20 new sites in the New York area.

The other thing we have not yet mentioned is the harvesting of hydrogen. Although it is the most abundant element in the entire world, it isn’t easy to get hold of. To strip it from the air requires a process called electrolysis. That means passing large amounts of electricity through water. This electricity still comes from – yes, you guessed it – burning fossil fuels. Toyota must facilitate the growth of alternative energies within hydrogen harvesting. Without that, they cannot convince people that hydrogen fuel cells are a fully green solution.

Claiming that the Mirai will be as big and as influential as the Prius is a strong statement. However, if anyone can do it, Toyota can. They have proved themselves capable. The Prius took ten years to change the world like it did. The Mirai goes into full scale production in 2015. It will be introduced in small numbers to begin with. Toyota are under no illusions that it will be a long process. There will be no overnight success, but it may just set the standard for the future. We’ll be keeping a watchful eye on the Mirai over the next few years.