One week ahead of its debut at the 2015 New York Auto Show, Jaguar has let loose a slew of images and details on the second-generation 2016 XF Sedan. The release comes alongside a high-profile stunt over London’s Canary Wharf. 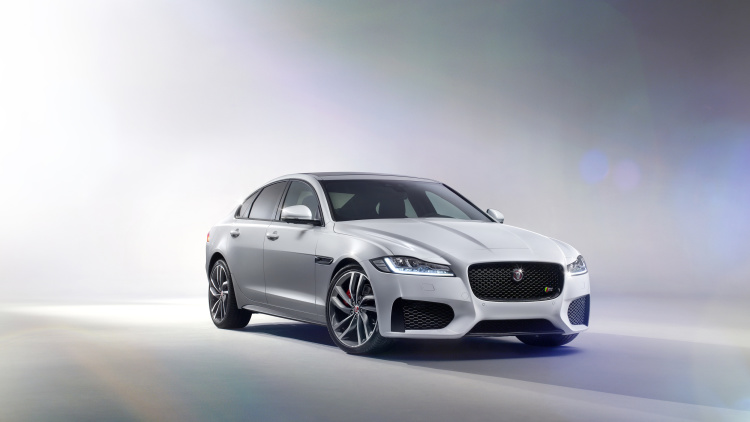 A total of 75 percent of the XF’s body is made from aluminum, which trims the big cat’s curb weight by 132 pounds on the rear-drive model and 265 pounds on the all-wheel-drive variant. Aside from aiding acceleration, braking and fuel economy, the advanced structure promises an increase in torsional stiffness as well as a 50-50 weight distribution.

Beyond that, the new car’s dimensions differ only slightly compared to last year’s XF. The wheelbase has been stretched by two inches, although the new model is 0.3-inches shorter and 0.1 inches lower.

Double wishbones are used in front while an integral-link suspension sits in back with standard traditional dampers and optional adaptive dampers. Jaguar is also promising the Configurable Dynamics system that was pioneered on the F-Type. No surprise here, but an electric power-assisted tiller will be in use, although Jag says it benefits from lessons learned with the XE.

Jaguar is mum on its full powertrain lineup, although it does mention that both 340-horsepower and 380-hp versions of Jaguar Land Rover’s familiar 3.0-liter, supercharged V6 will be offered, paired with standard eight-speed automatic transmissions (likely the highly regarded ZF autobox).

Jaguar’s designers, led by design director Ian Callum, didn’t rock the boat too much for the new sedan. Clearly inspired by the upcoming XE, the new XF gets a wider, but thinner grille. The headlights are slimmer, but retain a similar shape compared to last year’s car, and as is the trend, they’re now lined with LED accenting. The S trim, shown above, gets wide, menacing grilles in the front bumper as well as a total lack of chrome trim.

The XE influence is most evident on the XF’s tail, where the Aston Martin-aping taillights of the first-gen have been ditched, with broader, angled units, complete with an F-Type-inspired LED pattern. As with the current car, a thin chrome strip ties the lights together, while the lower bumper on this sportier model features a gloss black surround for the dual exhausts. Not surprisingly, the XF’s profile is pretty classic, with a very long hood and a short deck that terminates in a handsome duckbill spoiler.

The cabin follows the exterior’s lead, taking an evolutionary approach, with cues from the new XE in its overall layout. Jaguar’s InControl Touch system sits front and center, and is controlled via a standard eight-inch touchscreen or an optional 10.2-inch touch-based display. Joining the 10.2-inch display is the 12.3-inch TFT display found in the Land Rover Range Rover and Jag XJ.

We’re attending an in-depth backgrounder with Jaguar ahead of the new XF’s debut at the New York International Auto Show. Expect to hear a lot more then, including comprehensive details on the new model. Stay tuned. Until then, check out a pair of videos from Jag, including a walkthrough of the new car with Callum, as well as the full press release on the XF and its publicity stunt/London unveiling.