By now, you’re surely familiar with the joke about how cars from Mini are no longer… well, mini. We won’t repeat it here (oops, too late), except to say that the first vehicle that really pushed Mini’s historic boundaries was the original Clubman in 2008. 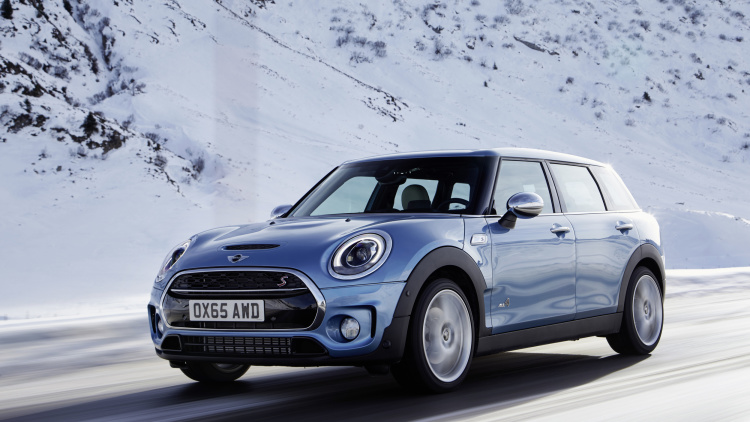 That machine featured a stretched wheelbase, an extra door on one side and an unconventional barn-door-style rear opening. For 2016, the Clubman recipe was revised with an even longer wheelbase and more conventional side doors, though still with the split rear hatch. Now, finally, the Mini Clubman is available with all-wheel drive.As you would expect from Mini, the new Clubman carries All4 branding. A propellor shaft sprouts from the front differential, and a new rear diff is added with an electrohydraulic clutch to send power to the rear wheels when needed. Mini promises that its All4 system will not only be a boon in inclement weather, but will also aid high-speed handling. We look forward to putting those claims to the test.Drivetrain options are borrowed from the standard front-wheel-drive Clubman range. A 134-horsepower three-cylinder comes in base Clubman models, and a 2.0-liter mill with 189-hp powers upgraded Clubman S models. An eight-speed automatic with paddle shifters and launch control is optional, though shift-yourself purists will surely opt for the standard six-speed manual. Mini says the Clubman S All4 can record a 0-60 time of 6.6 seconds with the automatic, or 6.7 with the manual. That’s a couple tenths quicker than the front-drive Clubman S.Cargo space remains at 17.5 cubic feet with all seats in place, or as much as 47.9 with the back seats folded, so the rear differential and propellor shaft don’t impinge on passenger space. Fuel mileage figures haven’t yet been released, but we’d expect a small drop from the standard Clubman’s 25 city and 35 highway ratings. We’d also count on a price increase of a few thousand dollars to get all-wheel drive.