Where do old BMWs go when their time is up? Vietnam, it seems. VinFast, the newborn Vietnamese automaker, is using BMW platforms to build its first production cars, which it will present at the Paris Motor Show next month. 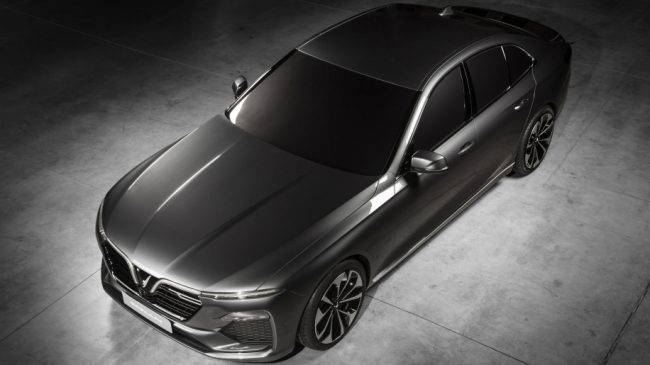 The new large VinFast cars, which Autocar says are based on the outgoing 5-series and X5 SUV, have been designed in collaboration with famed Italian design house Pininfarina. They will have powerplants derived from BMW’s two-liter, four-cylinder N20 turbo engines, just without the Valvetronic variable valve timing system. There will be two power figures available: 175 horsepower and 227 horsepower. The transmission is ZF’s eight-speed unit.

Thanks to the already-existing platforms and by completely bypassing the clay model stage, vehicle development time has reportedly been brought down to just 11 months, from the first sketches to final touches. VinFast has also said that the final designs have been chosen by consumer panels consisting of hundreds of thousands of people. Pilot production is slated to begin in March of next year, with full-scale production commencing in September 2019. The vehicles will be built in a new facility near Hanoi; the company plans to offer five vehicle lines in 2019.

In June, GM and VinFast also signed an agreement that enables VinFast vehicles to be sold throughout the existing Chevrolet dealer network in Vietnam, which VinFast’s parent company VinGroup will take over. VinFast will also take control of the former GM Hanoi factory that was used to produce GM-Daewoo vehicles.

However, the Paris Motor Show cars aren’t merely outgoing BMW models with new skin. VinFast’s engineers have reportedly “future-proofed” the platforms with improved pedestrian and side-impact protection tech to keep the cars fresh for the upcoming decade, with focus on making the cars pass global regulations so that they would be viable to export. And the people behind VinFast’s launch are big names: former long-time General Motors personnel such as designer David Lyon, engineering VP Shaun Calvert, and vehicle line director Roy Flecknell, along with Magna/Tata engineering lead Kevin Fisher. As well as Pininfarina, VinFast also utilizes the services of well-established automotive contractors such as Bosch, Magna and Siemens.

VinFast plans to build 500,000 vehicles per year by 2025 — and 1 million e-scooters on top of that. The partly-BMW-based lineup is also bolstered with an entry-level model based on the Opel Karl/Vauxhall Viva, along with an electrified bus developed in collaboration with Siemens.