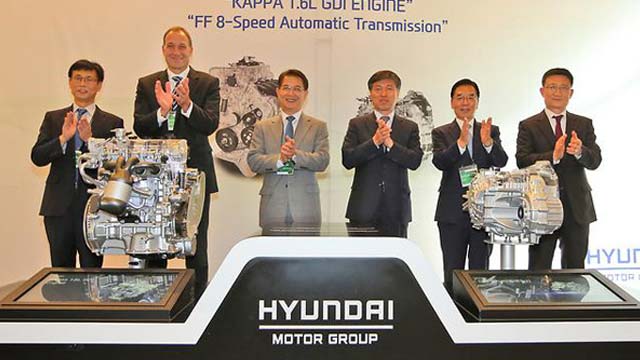 The EGR system applied to the engine helps to recirculate exhaust gases back into the cylinder and burns them again. The new Kappa HEV engine alone delivers a 3% gain in fuel economy through three stages: gas extracted upstream ensures more than 20% EGR rate, the EGR cooler delivers a cooling efficiency of 98% and the single stage gear EGR valve results in a 56.9 millisecond response time. A specially designed straight intake port increases the tumble flow of the EGR gas to allow fast combustion to further aid economy and boost power output.

The integration of technologies achieves a new engine thermal efficiency from 30% (of any typical engine) to 40% and secures competitive performance. The new unit produces 105 PS (77.2 kW), 15.0 kgf.m (147 Nm) and will be fit for future hybrid models.

The unit’s gains in economy and performance come from several sources including a direct control valve body that allows solenoid control of the clutch directly rather than via several valves. By simplifying the structure of the valve body, the new transmission reduces oil leakage and improves the stability of gear shifting.