In its previous iteration, the Mini John Cooper Works three-door was a bad little mother. It looked like an engorged puffer fish facing down a shark, sounded like squadron of hornets with even the tiniest provocation of the throttle, and turned corners like it was angry at them. It was hard riding and ill mannered in all sorts of daily driving situations, but supremely satisfying when used in the all-out-attack mode for which it was designed. I dug every minute I spent in one, when really concentrating on driving. (As a commuter or passenger, not so much.) 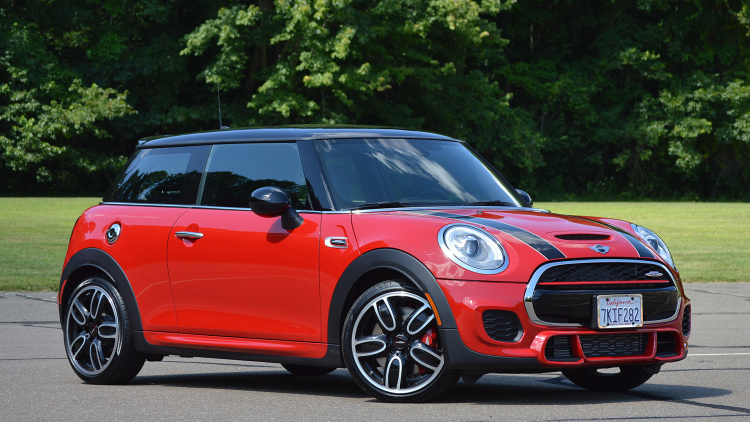 It only took fifteen minutes of driving on the lilting, tree-lined roads outside of New Haven, CT, to realize that the 2015 Mini JCW Hardtop was a lot less pissed off. And with more power, refined ride quality, a better interior, and an available automatic transmission, a lot more suitable for a wide variety of drivers. The little hellion has matured.

On that grownup tip, the first of the many ’15 JCWs I sampled was fitted with a six-speed automatic transmission. Cue collective shocked gasp. I’ll forgive you if you didn’t know an auto was going to be available equipment on the JCW, as Mini product planners had to remind me that it had been offered for the first time on the model-year 2013 car. Even then, the manual trans saw an impressive 75-percent take rate, so it’s not as if many of the auto-shifters made it to the street. That could change in this new generation, where the 6AT acquits itself quite well. Wheel-mounted paddles offer near immediate response to requested shifts, and programming for the sport setting causes gears to be held up to the top of the tach.The six-speed Getrag manual transmission is still the better option, even the car is two-tenths of a second slower to 60 miles per hour with it (6.1 vs. 5.9 seconds), and less fuel efficient in the city (23 vs. 25 miles per gallon). The manual uses a long-levered shifter that still feels positive going between gates, and a short-travel clutch that’s got nice weight and an easy catch point. It also offers defeatable rev matching, smoothing out even very aggro downshifts. Mini measures the manual as slower than the auto, but I had a lot more fun using it to harness the increased power of the 2.0-liter turbo four-cylinder engine. For me, a hot hatch needs to be involving to succeed at its mission in life, and the manual is far more engaging, even if the automatic is quicker than the human hand.

Raise the side-sloping hood of the Mini, and you’ll find a new engine where the 1.6T used to be. The bigger four makes 228 horsepower and 236 pound-feet where the smaller power unit made 208 hp and 192 lb-ft. The new engine will dog under 1,500 rpm or so, but the added power is immediately noticeable once you’re through the red light and passing slowcoaches on the left. I didn’t get much highway time in rural New York and Connecticut, but I felt confident enough in the mid-range power that I made plenty of jumps through traffic on dotted-line two lanes. (Who doesn’t love buzzing a hay-toting tractor?)

If I had to judge engine output based on exhaust note though, I’d have told you the 1.6-liter doubled the new 2.0T. Even from the outside and back of the car, facing the centrally mounted dual pipes, the new Mini motor doesn’t sound anything like its rip-snorting predecessor. From the cabin it’s downright quiet, and under full throttle you hear as much engine as exhaust.

Mini is positioning itself as a premium brand in the small car space these days, so some price premium makes sense (if you buy that it’s upmarket from VW). But it’s really hard to make a content-for-value argument for the JCW. Take the Focus ST as a counterpoint: Ford’s 402A equipment package adds a tremendous amount of feature content – electrically adjustable Recaro seats, 18-inch wheels and y-rated tires, Sync with MyFordTouch and navi, etc. – and still nets out to a few bucks under the JCW starting price. This is hardly a budget performance car.

On the other hand, Mini has made tremendous strides for its quickest-ever model in terms of ride refinement. All but four of the test cars on offer rode on runflat tires and the optional 18-inch wheels. Normally that combination would be a surefire recipe for crashiness. But even over less-than-glass-like surfaces, the JCW was surprisingly plush.

Handling is still a standout feature for the Mini, as well, despite being as different as any other one dynamic piece of the experience. In rough terms, the outgoing car was frenetic; changing direction with a kind of magically fast abruptness that was destined to be polarizing. That dazzling ability for redirection has calmed considerably here, at least on the open road. Over winding farm lanes the JCW offered quick turn-in and enough progressive in-corner roll to keep things flowing and fun. My car was optioned with two-mode Dynamic Damper Control (accessible via the modular Sport/Mid/Green dial below the gear lever), whose sport setting was still quite stable under a cornering load, with the default setup softening without going squishy.

Oh, and an extended session lapping Mini’s autocross-style cone course proved that the JCW will still turn hard and tight when you ask. The hyper-speed rotation that I didn’t feel on the street turned out to be still in evidence here, if I dialed up enough steering angle with strategic stabs of brake. The session also hammered home that steering feel is still high on the list of Mini values; determining the levels of wheel slippage was easy thanks to the informative tiller.

Take the enthusiastic steering, excellent ride and handling balance, and quite cabin, and you’ve got a compelling case that the Mini JCW is actually a kind of evocatively styled, front-drive BMW. In fact, BMW could probably remember a lesson about steering feel from the hot hatch – certainly the M cars.My question is, does the JCW audience want a micro-Bimmer? Mini seems to think so. As I said at the outset, the company seems to be making a play for a broader audience by softening experiential edges, but amping up the cartoon-like proportions and doubling down on a riotous interior design. You’ll make up your own mind as to the success of the triple-gawp front-end design, and the harangue of surfacing, shapes, colors, and doodads that compose the cockpit.

I already miss the old JCW. For me it was a truer execution of the Ultimate Modern Mini concept. It was fun like a rollercoaster with a broken seatbelt at a craggy old amusement park. The new one is an OSHA-approved new ride at Epcot. Less of a hot hatch, more of a performance car. Such is the way of the auto world, I suppose.

For those who dig Mini’s vibe, and crave higher performance than the already-good Cooper S can offer, dealers are now stocking cars and taking orders. They’ll be more than happy to take that immature little brat of a last-gen JCW as trade against the cost of the new, all-growed-up car. For infantile driving enthusiast like me, I suppose that’s good news: another shit-kicking JCW on the used market.