All is quiet on the northern front. Normally, on a weekday afternoon, the Nürburgring Nordschleife would be crowded with prototypes being tested or the exotica of a high-end track day. Instead we arrive to find it completely deserted, with the only car authorized to use the 12.9-mile-long track being the almost painfully green Mercedes-AMG GT R that is currently sitting silent in the short pit lane. Mercedes must have written a sizable check for exclusive access, the famous circuit booked to give us a taste of its 577-hp range-topper’s capabilities. 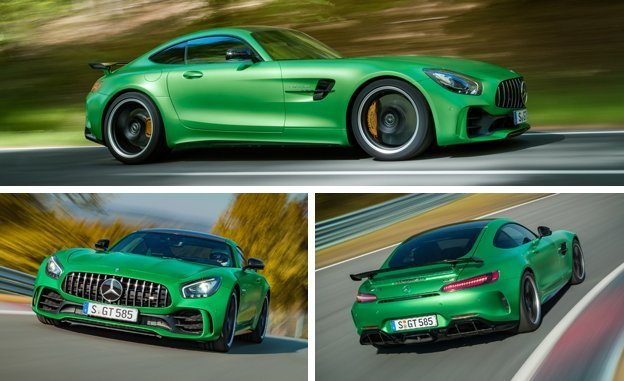 The GT R is in its spiritual, if not corporeal, home. We might be 191 miles from AMG’s base in Affalterbach, but every part of this car has been designed to perform here, especially against the clock. The R is wearing a bright metallic shade of paint that puts us in mind of a streaking frog, officially known as Green Hell Magno. This is a reference to Jackie Stewart’s famous description of what the Nürburgring was back in its driver-slaying heyday (we hope he’s getting a licensing fee) and evidence of the obsession with the place that grips the auto industry.

The ’Ring Is the Thing

As cars have gotten faster, it has become harder to distinguish them through raw performance statistics. Straight-line metrics such as acceleration and even top-speed numbers are losing their relevance in a world where top sports cars routinely hit 60 mph in three seconds and many can do 200 mph. Hence the importance placed on setting lap times of the Nordschleife.

This place is a historical anomaly, a circuit designed to show off the monstrous speed of prewar Grand Prix cars and long since adjudged too dangerous for more powerful motorsport categories. Nothing faster than GT3 cars competes here these days, and the Nordschleife’s main function is as a dynamic playground for chassis engineers and, through the Tourist Driving sessions when anyone can have a lap in return for 29 euros, to keep YouTube stocked with crash videos.

Records aren’t going to be set today, but with Mercedes GT3 driver and ’Ring specialist Thomas Jäger driving, there’s a chance to experience what a fast lap feels like ahead of when the GT R sets its own time in the next couple of weeks.

We also have Frank Emhardt, the development boss of the GT, on hand to talk us around the car. He introduces its movable aerodynamic elements, its upgraded engine, and the rear-steering system that can electrically steer the rear wheels by up to 1.5 degrees. (Read more in our previous deep-dive story.)

We’ve long suspected that passenger rides like these are collective revenge by automotive PR reps on the entire genus of journalists. The Nordschleife is a particularly vicious track to experience without a steering wheel in front of you, its roller-coaster-like combination of corners and crests making even the most iron-stomached feel queasy.

First impressions are of the sheer force of the GT R’s acceleration and how angry it sounds. Second impressions, arriving seconds later, are of the severity of the g-forces generated under braking and how even the heavily bolstered sport seat suddenly feels short on lateral support in the corners. Third impressions? Maybe lunch wasn’t such a great idea.

He also calls out the rear-steering system for praise. It turns the rear wheels in the opposite direction to the fronts at low speeds, but above 62 mph they turn in sync with the fronts. “During testing, we were able to switch it on and off, and you realize what a difference it makes,” Jäger says. “In the faster corners, the car is much more stable. I expected it to make a difference in slow corners, but I was really surprised how much more confidence it gives when you are going fast.”