About 4 percent of you digging into this first drive, I predict, will be salivating uncontrollably. These folks, who should go grab a bib right now, know exactly what this 2017 Nissan Armada is. “It’s a Patrol,” they sputter, turning slightly pink, “the all-conquering Dakar Rally hero! The rugged backbone of the UN in the most inhospitable environments! A real, full-size, all-terrain monster!” They know a Patrol hasn’t been sold in this country since 1969, leaving the Land Cruiser to corner the hardcore 4×4 SUV market only to abandon it somewhat as it packed on the pounds and luxury equipment. “That’s all about to change,” our American Patrol fanboys sigh. “It’s coming!” 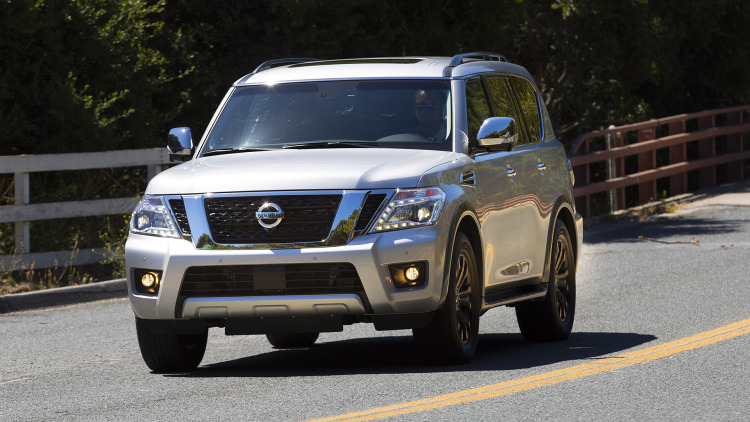 Hate to burst your saliva-bubble, chaps, but this isn’t the Patrol you’ve been looking for. Yes, it shares a rugged body-on-frame chassis and powertrain with what the rest of the world calls the Nissan Patrol, and it’s built alongside that vehicle in the Kyushu factory in Japan. But most of the really good off-road equipment has been left off the menu. You can’t get locking front and rear differentials, you can’t get the trick sway bar disconnects for extra wheel articulation, and you are stuck with a suspension tune that caters to American on-road preferences. And you can’t get the Hydraulic Body Motion Control (HBMC) suspension system that links the four corners hydraulically, which reduces roll on-road and reduces harshness off. That’s on option on the Patrol, but it’s not in the cards for the Armada.

This also isn’t the first time we’ve seen this chassis or engine. Americans have been able to buy it since the 2011 model year as the Infiniti QX80 (née QX56), packing an almost identical 5.6-liter gasoline V8 (known as the VK56VD) and Jatco-built seven-speed automatic gearbox and either rear- or four-wheel drive. The Infiniti, it should be noted, does have fancy cross-linked suspension which reduces body roll during cornering as an option.

In that role, it has many things going for it that competitors don’t offer. The GM full-size SUVs, based on the K2XX platform, like the GMC Yukon and Chevrolet Suburban/Tahoe, are perennial strong sellers but can’t claim the sort of rally and exploration cred that the Patrol does worldwide. The rest of the competition is slim and aging.

Nissan won’t release full pricing for a little while, but its spokespeople dropped a hint: The Armada is expected to start at $45,395, for what logic tells us is a two-wheel-drive SV model. From there, it steps up into SL and then top-of-the-line Platinum trim levels. In the QX80, all-wheel drive is a $3,100 option. We don’t expect it to add quite that much to the Armada’s price, but it might be pretty close. No matter how you cut it, a person could buy this full-size SUV for tens of thousands of dollars less than a Land Cruiser and get, at least superficially, very similar on- and off-road capabilities.

One more note about the cargo area: The load floor is exceptionally high. That’s likely to preserve departure angles and clear room for the full-size spare tucked up underneath, but it’ll make coaxing very heavy or bulky objects up and over the rear bumper a chore for shorter folks.

Instead of being truckish, the Armada is as tame and composed as any large unibody crossover. For Armada buyers and Nissan engineers, that’s a triumph and a high compliment – not an easy task. Our Patrol enthusiasts are probably disappointed slightly, if not surprised – they know as well as we do that a fraction of a fraction of Armada buyers would appreciate extra off-road capability. They are surely licking their chops, however, to head to the overland expedition forums and start making plans to swap overseas Patrol parts in order to build long-distance rigs of grace, majesty, and grit. For everyone else, if you’ve been drooling over a Land Cruiser but don’t have most of $100,000 to spend, the Armada is the ticket.