When the Jaguar F-Type made its debut in 2012, it was met with all the scrutiny you’d expect for the successor of one of the most iconic vehicles of all time. Following Jaguar’s E-Type roadster could have easily been a capital F failure, but instead Jaguar delivered a solid winner that has grown into 24 different variants, from a V-6 supercharged roadster to a 575-horsepower coupe capable of hitting 200 mph. 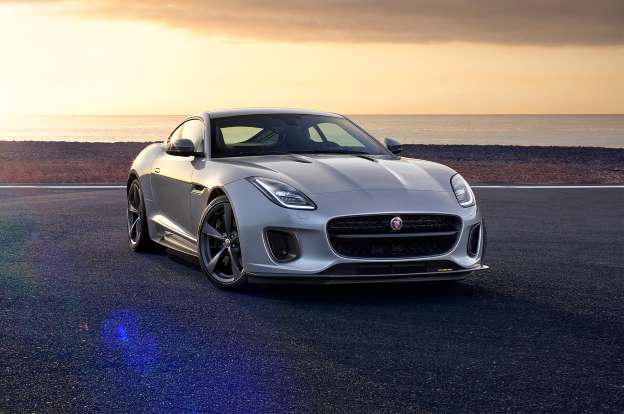 The latest F-Type variant is an entry model powered by a 2.0-liter turbocharged four-cylinder engine. We had a brief drive of this 2018 Jaguar F-Type in R-Dynamic, and these are the key takeaways.

Although billed as all-new, the F-Type’s 1997cc direct-injection four-cylinder is a derivative of the Ingenium-branded engines used in Jaguar’s F-Pace SUV and XE sedan. What is new is that the inline-four’s exhaust manifold is integrated into the cylinder head, which helps improve fuel economy and reduces emissions due to quicker light off.

Jaguar claims its new four-cylinder engine saves approximately 115 pounds over an equivalent F-Type powered by the previous entry-level engine, a 3.0-liter supercharged V-6 that makes 340 horsepower. Jaguar also claims its base model is the lightest F-Type yet, with 1 percent better weight distribution and front and rear spring rates that have been reduced by 4 and 3 percent, respectively, to suit the reduction in mass. We can verify exactly none of these claims until we test the new vehicle, but the seat of our pants confirms that means it is a very different-feeling F-Type.

3. It handles lighter, too

Jaguar recalibrated the four-cylinder F-Type’s electric powering steering to compensate for the weight reduction. In cornering situations that engage the brake-based torque vectoring system, which applies brake pressure to the inside wheels to keep the nose pointed forward, the system works seamlessly in the background. There are no obvious head-tossing tugs or sounds of brake solenoids firing, just lightness and barrelling, straight-not-sideways speed out of esses and curves.

The light theme continues with new full LED headlights that incorporate “J-Blade” daytime running lamps. Four distinct bumpers, each faster-looking and more fenestrated, span the range from base to top-step SVR. But the easiest way to tell what F-Type you’re dealing with is to check out the backside, below the updated, darker taillamps.

Thinner, racier seats now grace the cabin of all F-Types and come in two types—Sport and Performance. Base model and R-Dynamic models come with Sport seats, while the higher-spec 400 Sport, R, and SVR F-Type get Performance versions, which are sculpted at shoulder height for more support. Both have seat frames made of magnesium alloy, which saves up to 17 pounds without compromising support or safety.

In addition to receiving Jaguar-Land Rover’s updated InControl Touch Pro infotainment system, which is slowly making its way across the entire product line, the F-Type gets a familiar suite of driver assistance systems centered around a new forward-facing stereo camera system mounted behind the rearview mirror.

Speaking of camera, Jaguar collaborated with the adventurists at GoPro to develop the ReRun app, which enables footage from a GoPro camera (not supplied) to be overlaid with performance data captured while driving. Speed, throttle and gear position, braking force, lateral acceleration, and steering wheel angle are captured via a smartphone that is also paired with the F-Type—fun for track days and canyon carving sessions.

The 2018 Jaguar F-Type is on sale now starting at $60,895 for the 296-horsepower turbocharged four-cylinder base model. Jaguar claims it will hit 60 mph in just 5.4 seconds, which we will confirm or deny just as soon as we have one in for testing. Stay tuned.