Back at the L.A. Auto Show, there’s a bright orange 2019 Corvette ZR1 Convertible on a show stand, glimmering under the lights, being ogled by admirers and measured by competitors. Just over 100 miles away, at the oldest permanent road course in the U.S., at the western edge of the Mojave Desert, two beat-up ZR1 coupes wait in a pit garage. They’re filthy, with a couple of vehicle lifetimes between them. One is covered stern to snout in stick-on swirly camouflage, roughly applied, with bits of the bright red paint showing beneath. 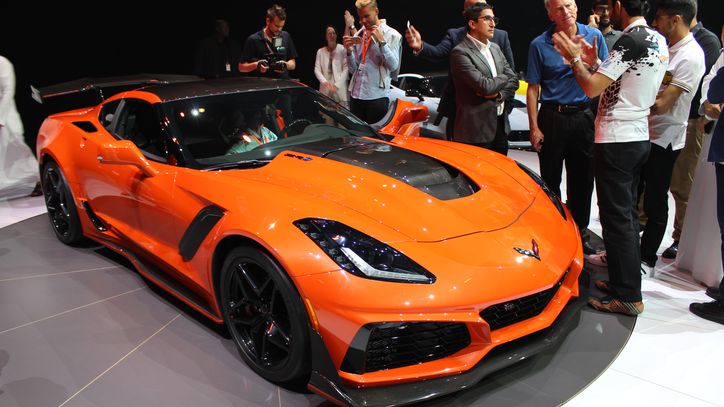 The other is half covered, but the exposed parts are unfinished with trim pieces missing. They’re dead cars walking, since pre-production cars like this end their brutal lives in the jaws of a crusher. We’re not here to look at them, of course.

That’s pretty much the ZR1 in microcosm: Everything’s turned up a bit. Juechter and his comrades are gleeful, telling us about things that their new LT5 engine broke during the four years they developed it. Like dynomometers. Lots of them. The exhaust stacks would get so hot from the blast furnace that is this motor that they’d crack. Jordan Lee, the GM smallblock program manager, tells us this like the proud dad of an especially rowdy kid. So they tried water cooling jets.

“We treat aero as a safety issue,” Juechter says. “When you have a car that can approach the speed of a light aircraft, you have to.” And, in case you were wondering, the perfect way to set up a ZTK-optioned car is to hunker the front end down a half inch by cranking the transverse leaf spring adjusters and tipping the wing down to the full 5 degrees of its travel.

Speaking of pulleys, compare the LT4 and LT5, and you’ll instantly realize that there’s potential for an smaller pulley to increase the LT5’s output even more. Juechter senses what we’re all thinking. “I want you to be sure that an overdrive pulley will void the warranty,” he says, laughing a bit. He knows folks will still do it, but he won’t guarantee what’ll happen after that. The car will already run the quarter in the high 10s, and tops out at an SAE-certified 212.48 MPH, but “good enough” has never been good enough.

The ones we’ll drive next year will be too pretty to abuse this hard, and that’s a shame. You know what? Give us the car we just flopped out of, leaning against its unpainted door. It’s a weapon, more precise than you’d imagine given its ludicrous powerplant, exuding menace from every scrape and wound. It’s never seen carnauba wax, won’t end up with french fries under the seat, couldn’t win a car show trophy if it was the only one there.

A fantasy, alas, given its fate. But the $119,995 ZR1 will be very real. Maybe if you ask nicely enough, GM’s development engineers will break it in for you before delivery.