General Motors and the United States Army Tank Automotive Research, Development, and Engineering Center (TARDEC) showed the fruits of their extensive labors last year at the fall meeting of the Association of the U.S. Army in Washington DC. Built on a customized version of the civilian Colorado pickup’s platform, the Chevrolet Colorado ZH2 is a hydrogen fuel-cell electric vehicle that has been pressed into military service. 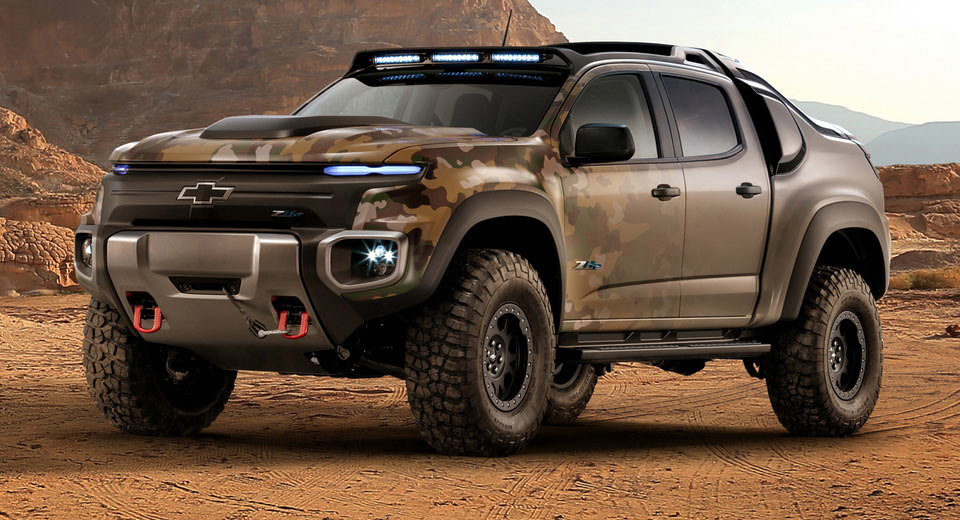 Nearly 7 feet tall and more than 7 feet wide, the Colorado ZH2 has an imposing stance highlighted by massive 37-inch BFGoodrich Mud-Terrain T/A KM2 tires wrapped around 17-inch Ultra beadlocks. A reinforced chassis and specially modified Colorado ZR2 suspension provide robust performance in a wide variety of terrain. The ZH2’s body has been moved rearward by four inches to accommodate the larger tires, and Kevlar-infused carbon fiber was used to create the unique front and rear clips. Rigid Industries lights and a Warn winch add to the ruggedness. In spite of the added capability, the ZH2’s primary function is to serve as a testbed for hydrogen’s viability in the military as a propulsion method.

Under the hood lives a transversely mounted 94-kW hydrogen generator. A 177hp, 236–lb-ft motor converts electricity to movement and funnels it through a two-speed transfer case to the front and rear axles, which are equipped with ZR2-fare electronic-locking differentials. This setup is good for a top speed just over 60 mph with a range of about 140 miles on the 4.2 kilograms (9.3 pounds) of hydrogen that is stored in three cylindrical tanks in the front of the bed area. Refilling the tanks from a high-pressure source takes just 3-5 minutes through a port under the rear clamshell.

The ZH2’s body is typical of what you would find on a normal Crew Cab Colorado, with a few upgrades. Replacing the factory seats are four units from renowned racing safety experts Recaro. Six-point harnesses from Simpson keep the occupants securely in their seat and mount to custom-fabricated harness bars located behind the seats. There’s no additional rollcage because it was determined that the Colorado’s cab structure was strong enough for the intended use. Gone is the carpet, replaced by spray-on bedliner on the steel floor pan for easy cleanup.

Potential benefits to the fuel are many, including nearly silent operation since the hydrogen generator powers an electric motor, reduced thermal signatures compared to internal combustion engines, and instant torque thanks to the aforementioned electrified powertrain. Furthermore, since the primary byproduct of hydrogen fuel cells is water, operating the Colorado ZH2 is environmentally friendly and provides an added source of potable water for extended operations in harsh environments, approximately 2 gallons per hour of operation.

Furthermore, the fuel cell features an exportable power take-off (EPTO) that allows the Colorado to power activity away from the vehicle. In essence, this turns the ZH2 into a mobile power generator in places where electric power is unavailable or unreliable. When acting as a stationary power generator, the ZH2 can export 25 kilowatts of electricity continuously and up to 50 kW of peak power. That’s enough to power an entire suburban neighborhood or Army encampment.

Before we get too far, since the ZH2 is a one-of-one prototype neither General Motors nor TARDEC would allow us to actually take it for a spin. And really we can’t blame them. We were however invited out to GM’s Milford Proving Grounds to go for a ride in the truck before it was handed over to the Army for their year of testing. The course laid out for us spanned several miles of dirt roads, moguls, hill climbs, log crawls, and cracked concrete. From outside the truck the only discernable indication that it’s powered up is the whir of cooling fans. Once moving, the fan noise gives way to tire roar. And that’s it. The truck is nearly silent, and it’s quite eerie. With a simple swap from mud to all-terrain tires and a toggle to disable the cooling fans, the ZH2 could go from nearly silent to undetectable.

The ZH2’s suspension uses custom-tuned Multimatic dampers. These are the same absorbers found on the ZR2 Colorado, but with a few minor tweaks. Ride quality through the rough terrain was nothing short of impressive. The massive 37-inch tires filled the holes while the suspension and dampers tamed the bumps. Compression damping was firm but controlled, with no undue bottoming.

GM and TARDEC first announced their collaboration on the then-unnamed Colorado ZH2 more than a year ago, and the team built the running prototype that you see here in just nine months. Both entities have fuel cell research facilities just 20 miles apart from one another in Michigan, and the pickup marks the second collaboration this year between GM and the military. In June 2016, the U.S. Navy unveiled a submarine drone powered by a similar GM-designed fuel cell, which the company says demonstrates the powerplant’s flexibility in a variety of situations.