Garmin is showing off a new infotainment system at CES with features aimed to make both drivers’ and passengers’ lives simpler and more connected. The prototype (shown above) is in a Volvo, but the company is expected to make it available across the auto industry. 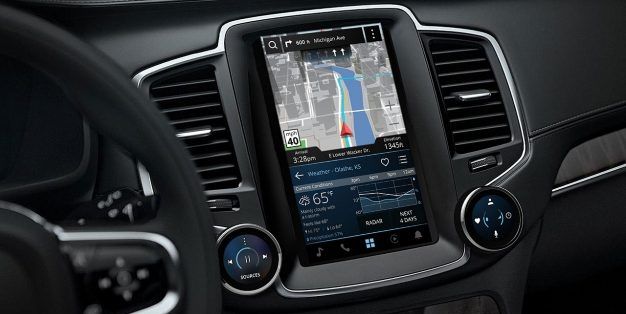 Called a scalable infotainment platform, the new system operates using an Intel Atom quad-core X7 or Intel Atom dual-core X5 processor, which were launched in 2015 and have up to 2 MB of cache. So the tech inside the tech isn’t all new, but the features are.

Those familiar with Volvo’s new wave of luxury interiors will notice something different in the photo and video demonstration accompanying this post: two extra knobs. These are pieces of Garmin’s infotainment system, previously seen in concepts under the name Lenexa. They provide physical rotary-knob functionality with integrated customizable screens at the center of each. They can also be used as controllers that click up and down or left and right. This concept appears to be a modified version of the Volvo XC90 dashboard.

Working together with the touchscreen, these dials control numerous features that aren’t typical for infotainment systems—and particularly for navigation. Garmin paired up with AccuWeather to create route guidance that pays attention to the weather. The technology will recognize bad weather on your way to your destination and could potentially show drivers which areas to avoid. Navigation info will also be available to back-seat passengers through Wi-Fi. Any passengers with tablets or smartphones will be able to access the nav and view routes from their own devices. They could also send points of interest or destinations to the main infotainment system using the same built-in connection.

The system also has Amazon Alexa integration. No smartphones are needed to access Alexa’s voice-controlled navigation or its media player or even to control Alexa-linked home automation. Did you leave the garage open or a light on? Simply tell Alexa, and the problem is solved. Drivers can also ask Alexa a question, and the answer will be read aloud, displayed on the infotainment screen, or both.

There’s no word as to exactly when this system will reach production, but it’s another step forward in a constantly evolving sector.