Hyundai Motor today announced the launch of a refreshed version of its HB20, a hatchback developed exclusively for Brazil. The New HB20 features an upgraded visual identity and a revised cabin that is more refined and better equipped, as well as a range of new connectivity, comfort and safety features. The HB20 will go on sale in Brazil from October, with sedan and crossover versions to follow. 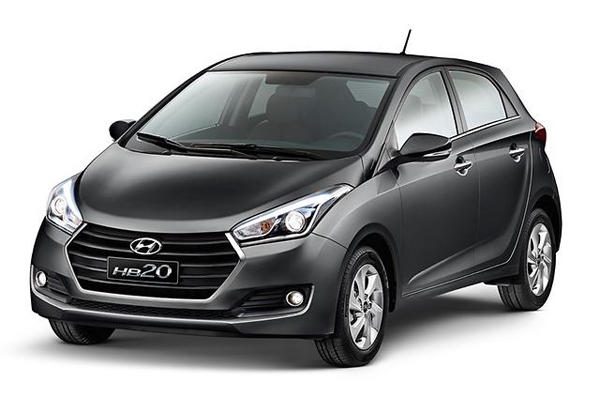 Launched in October 2012, the HB20 has become one of the best-selling cars in Brazil, surpassing the milestone of 500,000 units produced locally in August this year.

Inside, the New HB20 is more stylish and comfortable, with new seats coverings – including optional brown leather. The Premium version benefits from automatic air conditioning, two side airbags and automatic retractable side mirrors. An on-board computer, standard on all versions, now has a maintenance reminder function.

A highlight of the revised cabin is an exclusive entertainment centre, blueMedia®, bringing advanced on-board connectivity and entertainment features. The system is compatible with Car Link®, allowing content mirroring of Android phones on the dashboard screen.

Available applications include those for navigation (e.g. Google Maps, Maplink, Apontador and TomTom Brazil) and music players (e.g. TuneIn, Spotify, Deezer and Rdio); as well as native smartphone content. With the car in full stop, full smartphone content can be accessed, including Facebook, Instagram, Whatsapp, internet browsers and games.

The New HB20’s new entertainment centre will also be compatible with Apple’s CarPlay® platform in 2016.

Optional in Premium versions is blueMedia®, offering a modern and intuitive interface with a 7-inch touchscreen, complemented by steering wheel audio controls, Bluetooth connectivity, audio streaming, access to the phone’s calendar, iPod compatibility, MP3 player, and the facility to display photos and videos.

All versions of HB20 come with blueAudio®, the new version of this system incorporating a 3.8-inch LCD screen.

Improvements have also been made to both the HB20’s Kappa 1.0-litre and Gamma 1.6-litre engines for improved fuel economy and performance.