Skip to content
Wed. Sep 28th, 2022
It’s really quiet in the Sprinter assembly hall south of Berlin. Unexpectedly quiet for a place that builds more than 200 large vans every single day. Whereas previously there were countless wire baskets, shelves and carriers full of material all around the assembly lines, and the employees had to pick the correct parts for each van themselves, now the scene is dominated by “driverless transport trucks”. These driverless transport trucks supply the assembly personnel on the line with prepared goods baskets from the logistics and picking areas fully autonomously. In short: intelligent production at the Mercedes-Benz Ludwigsfelde plant. 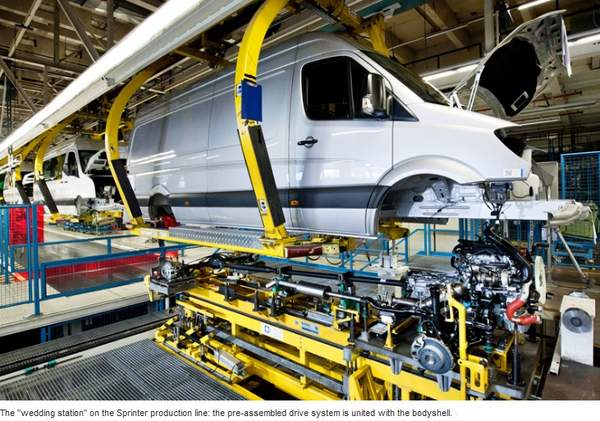 “The Mercedes-Benz Ludwigsfelde plant is the benchmark when it comes to intelligent vehicle production. It’s what future plants should look like: streamlined, sophisticated processes; pinpoint, highly efficient logistics; and faultless assembly,” says Sebastian Streuff, Manager of Mercedes-Benz Werk Ludwigsfelde GmbH since 1 June 2015. “In the last two-and-a-half years, the Ludwigsfelde plant has taken its future into its own hands with its highly qualified and highly motivated workforce. Today it is a shining example of the use of innovative production systems in the Mercedes-Benz Vans worldwide production network. It’s an impressive development, I am therefore all the more pleased to be shaping the future together with the team here in Ludwigsfelde.”
With around 2000 employees, the Mercedes-Benz Ludwigsfelde plant is one of the largest industrial employers in Brandenburg, and Daimler’s third largest van assembly plant worldwide. Ludwigsfelde is also the only European production site at which the open model variants of the Mercedes-Benz Sprinter “world van” (pickups and chassis cabs) are produced for a wide range of vehicle bodies. In 2014, the plant had a successful year and increased its output by 13 percent to over 48,200 units. And this positive trend is continuing in 2015, with capacity utilization remaining at a very high level. Since 1991 over 600,000 vehicles have left this assembly plant, which covers a total area of 540,000 square meters with a production area of 182,000 square meters. This total goes up by over 200 vans per day in a two-shift operation – with the vehicles being exported to around 130 countries. The plant therefore plays a key role in the Mercedes-Benz Vans global production network.
“Intelligent production”: shaping up for the future
Since the end of 2012 the Ludwigsfelde plant has taken major strides forward in terms of efficiency throughout the entire area of vehicle assembly. One main objective was to bring about a clear improvement in the interface and collaboration between assembly and logistics. Experts from the assembly, logistics and production planning departments first examined the entire process from the supplier to the point at which a part is installed on the line. At the same time, they also worked on establishing high-quality, robust and, above all, streamlined processes between assembly and logistics.
One example of this is door pre-assembly: whereas previously there were carriers practically nose to tail all the way along the line, and the employees had to locate, fetch and install the parts themselves, today there are just a few tool carts and data terminals. Everything else an assembler needs to fit a side door is today presented to the correct vehicle on the line just in sequence and just in time by a driverless transport truck in what is known as “carsets”. Here the complexity between assembly and logistics is extremely high: on the production line the employees assemble the Sprinter in over 350 different combinations, depending on wheelbase, weight, motorization or color. Consequently there is a different sequence for each vehicle, and respectively each Sprinter needs to have different components fitted. Thanks to sophisticated IT networking, exactly the right parts for each Sprinter are prepared in a carset cart and delivered to the assembly line. The driverless transport truck even takes care of unloading fully automatically: after arrival, the carsets are positioned directly to the line, all the worker has to do is take the correct parts truck, attach it to the pendant and start installing the parts. There are clear advantages: greatly improved workstation ergonomics, shorter walking distances, direct access to the material, more space on the line and a reduced accident risk thanks to the absence of forklifts.
Michael Bauer, Plant Manager in Ludwigsfelde up until the end of May and now responsible for worldwide assembly planning at Mercedes-Benz Passenger Cars, states: “We recognized the necessity of a very flexible factory at an early stage, continuously optimized production processes and, in doing so, ensured close coordination between management, Works Council and our employees. Only in this way it was possible to take such huge strides forward in terms of efficiency, quality and added value here at the site in such a short time. That is our recipe for success here in Ludwigsfelde.”