In addition to the chance to see bumper-to-bumper racing in a unique atmosphere, the roar of V8 engines is one of the things that compel people to attend NASCAR events, rather than watching them from the couch on TV. The front end of the Toyota Owners 400 at Richmond International Raceway was a whole lot quieter, though, because the 2016 Toyota Mirai made its debut as a pace car there. 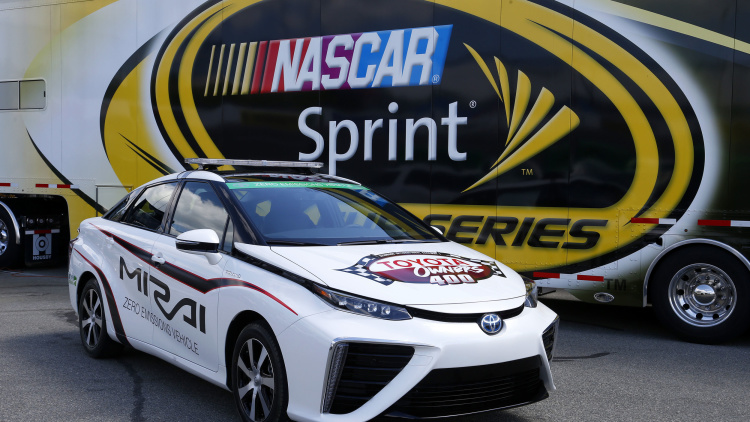 Outfitted with a light bar and a special livery, the Mirai became the first hydrogen fuel cell vehicle to ever pace a NASCAR race and led the cars to the green flag for Saturday night’s Sprint Cup round. The sedan was tested prior to the event to prove it had the performance required to lead the 43-car field. “Bringing the Mirai to Richmond to pace this important race is another way for Toyota to showcase our innovation and environmental leadership,” Ed Laukes, company vice president of marketing, performance, and guest experience, said.

There’s some precedent for Toyota to show off its green credentials to the NASCAR audience. In 2009, a Camry Hybrid paced the Coca-Cola 600. The automaker’s fuel cell tech already had a maiden motorsport outing, too. Late last year, the FCV Concept, which previewed the Mirai, was the zero car to check the roads for the Shinshiro Rally in Japan.