We’ve known a hotter BMW M2 has been in the works for some time, and now it’s finally here. BMW Just took the wraps off the 2019 M2 Competition today, and the big news? It gets a real-deal M engine from its big brother, the M3/M4. 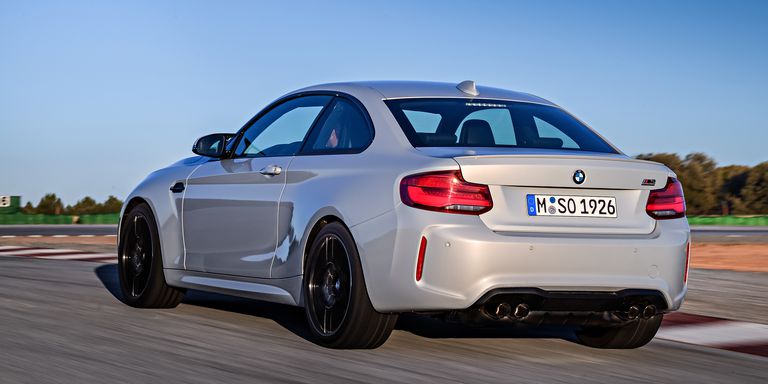 That engine, the S55, is a 3.0-liter twin-turbo inline-six making 405 horsepower and 406 lb-ft of torque. That’s an improvement of 40 hp and 63 lb-ft over the standard M2, which uses a modified regular-production BMW engine, rather than one designed by the M Division. The M2 Competition’s six is paired with a standard six-speed manual transmission (woo!), while a seven-speed dual-clutch remains optional.

The M2 Competition is 0.1 seconds quicker to 60 mph than the standard car, with the manual car doing the job in 4.2 seconds and the dual-clutch managing it in 4.0 seconds dead. Redline also increases from 7000 rpm to 7600 rpm thanks to a lightweight forged crankshaft. The cylinder walls are also coated with a spray-in material called Lichtbogendrahtspritzen, which sounds deeply German.

Keeping the engine lubricated is an advanced wet-sump oil system that uses a baffle to keep oil near the extraction pump. That should help prevent oil starvation in hard cornering. The cooling system comes off the M4 Competition Package and uses a large central radiator with two smaller side units. There’s also an engine-oil cooler, and dual-clutch cars get a transmission-oil cooler too.

To create the M2 Competition, BMW M engineers didn’t just stuff a hotter engine in a regular M2 and call it a day. There’s a host of chassis improvements to make the most of the added power. For starters, the front and rear axles come straight off the M3/M4, as does the under-hood carbon-fiber strut brace. And for extra stiffness, the rear subframe is mounted to the body without rubber bushings.

Inside the M2 Competition, things have mostly stayed the same, save for new bucket seats and—get excited—a red engine-start button. The exterior looks are slightly different too, most noticeably with larger kidney grilles and a “Competition” badge on the rear trunklid.

BMW will announce pricing close to the M2 Competition’s launch this summer, but we expect it’ll be somewhat pricier than the current M2’s $54,500. And if you want a regular M2, act soon—once it launches, the Competition will be the only M2 available.