We’ve recently established that there’s no longer any reason to complain if there’s a V-6 under the hood of your Chevrolet Camaro. No snickers, no snide remarks about wimpy pony cars; its inclusion as one of our 2016 10Best Cars is well deserved. So let’s take the exercise a step further: How about a V-6 Camaro with an automatic transmission? Could that be okay, too? 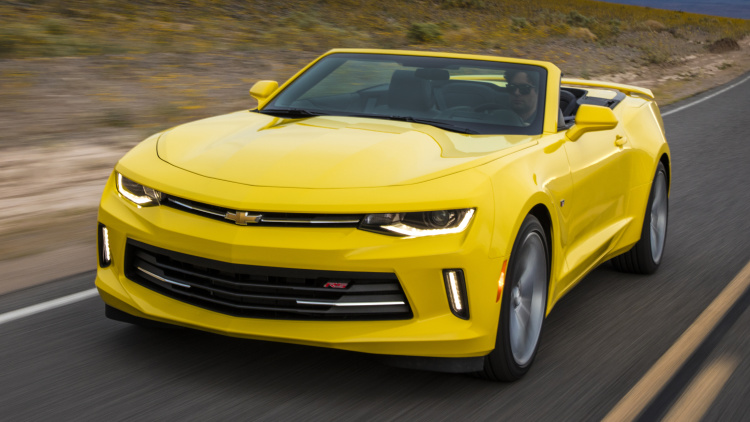 We had a preliminary take on this question last October, when a first drive of a new Camaro V-6 equipped with the eight-speed autobox left us favorably impressed. Now we’ve put a 2016 V-6 automatic (in RS trim) through its paces to fortify those impressions with objective test-track data.

First, the backstory: The V-6 that accompanied the launch of the sixth-generation Camaro is essentially as new as the car itself. Displacement is the same 3.6 liters as in the fifth-gen car, but it’s a bigger 3.6 liters, thanks to a 1.0-millimeter increase in bore and a 0.2-millimeter increase in stroke, to 95.0 by 85.8 mm. As with the Camaro’s 6.2-liter LT1 V-8, the V-6 is an oversquare design—bigger bore than stroke—and is willing to rev; peak horsepower comes on at 6800 rpm, just 200 rpm shy of redline. The compression ratio is high at 11.5:1, the cylinders are nourished by direct injection, and there’s Active Fuel Management (a.k.a. cylinder deactivation) to save gas. And the engine emits a heady tenor snarl when the tach spins past 4000 rpm.

Going by feel, shift speeds seem to be essentially a dead heat between manual and automatic. The Camaro’s Tremec six-speed manual has crisp engagements, and the Hydra-Matic doesn’t hammer home its shifts like a dual-clutch box. Its responses in manual mode seem to be at least on par with those of a competent human.

The V-6 manual Camaros come with a 3.27:1 final-drive ratio and a 0.75:1 top gear. The rear axle with the automatic is 2.77:1, and the eighth-gear ratio is 0.66:1, so it’s geared much taller in top gear than the manual. Also keep in mind that the automatic has two more cogs to play with, which helped our example achieve an observed 22 mpg, whereas we’ve failed to crack 20 mpg with the manual.

Our results reveal the automatic to be very close to the quickest of the three manuals, slower by just a tenth of a second to 60 mph and through the quarter-mile (5.2 and 13.8 seconds, respectively). The auto also recorded a 1-mph edge in trap speed, 104 mph versus 103. And it was quicker across the board than the manual test car that prevailed in a two-car shootout versus a Ford Mustang 2.3-liter EcoBoost.

Our only disappointment with this Camaro versus the other V-6 examples had nothing to do with powertrain: The automatic needed 166 feet to stop from 70 mph, which isn’t bad, but the manual cars got it done in 152, 153, and 158 feet. Fade was a non-issue, though.

Optional equipment made our test car a little pricey compared with the three manual-transmission models, with $1495 for the slushbox helping to inflate our example’s as-tested price to $40,425. Also, if you’re going to explore the maximum capabilities of this or any other Camaro, you might want to consider some color other than Bright Yellow ($395), a hue that’s surely visible both from low-Earth orbit and from behind the wheel of a police cruiser.

But back to the transmission debate: A manual gearbox still provides a greater sense of engagement with the machine. But the eight-speed automatic is more versatile, offering full-auto convenience, better fuel economy when you’re cruising, and manual operation when you’re feeling frisky, without a performance penalty. And best of all, the stigma is gone. For real.