Following a historic 2014 season in which Kia claimed the Pirelli World Challenge (PWC) Grand Touring Sport (GTS) Manufacturer Championship, today Kia Motors America (KMA) and its racing partner, Kinetic Motorsports, announced the 2015 driver line-up that will defend that title during the upcoming PWC season. Canadian Mark Wilkins, who finished third in the GTS Driver Championship in each of the last two years, returns to pilot the No. 38 B.R.A.K.E.S. Optima turbo, while experienced British racer, Ben Clucas, reunites with Kinetic Motorsports to make his PWC debut behind the wheel of the No. 36 Kia Racing DonorsChoose.org Optima turbo when the new season begins at Circuit of the Americas in Austin, Texas, March 7-8, 2015. 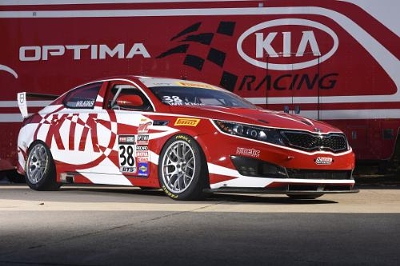 “The Kia Racing team has exceeded our expectations from the beginning of the program in 2010, and capturing the Manufacturer Championship in only our third season of Pirelli World Challenge competition took us to new heights in 2014,” said Michael Sprague, executive vice president of sales and marketing, KMA.  “Last season’s success is a story of dedication, passion, and teamwork both on and off the race track, and is a testament to the reliability, durability and performance of the Kia Optima.  We’re very pleased to have Mark Wilkins back with us, and the Kia family warmly welcomes Ben Clucas to our team.”

“I’m really excited for this opportunity to work with Kinetic Motorsports again and have a chance to drive this awesome Kia Optima,” said the 31-year-old Clucas, who was born in Frimley, U.K., and currently resides in Nether Heyford, U.K.  “I am anxious to get behind the wheel and compete in the Pirelli World Challenge, which will be a new series for me.  The series’ growth has been astounding; I’m excited to be a part of it. And it’s an honor to represent Kia and their very worthy charity partner DonorsChoose.org.”

Toronto, Ontario, native Wilkins rejoins Kia Racing for his third season behind the wheel of the No. 38 B.R.A.K.E.S. Optima turbo.  Fresh off a podium finish at the 24 Hours of Daytona in January, Wilkins is ready to get the PWC season underway and pick up right where he left off.

“Winning the Manufacturer Championship for Kia last season was a true high-water mark for me professionally. I fell short of my personal goal of winning the Driver Championship, however, and that’s what every driver wants,” said newlywed Wilkins, who was married in the off season late last year.  “I’m excited to get to race with Ben Clucas and am glad to have him as a new teammate.  I’m really looking forward getting the 2015 season rolling and hoping our momentum continues.”

The PWC season kicks off at Circuit of the Americas in Austin, Texas, on March 6-8.  GTS round 1 takes place Saturday, March 7, at 12:20 p.m. CT.  Round 2 is Sunday, March 8, at 10:20 a.m. CT.  Broadcast details are still to be announced.  Live streaming is available online at www.world-challengetv.com, and race fans can keep up-to-date with the team via the Kia Racing Facebook page at www.facebook.com/kiaracing and by following along on Twitter: @KiaRacing.