The eighth and final round of the 2014 Super GT Championship, the race to decide who would be the champion, was held on November 16th at Twin Ring Motegi (4.801km) in Tochigi Prefecture where the #23 MOTUL AUTECH Nissan GT-R of Tsugio Matsuda (Japan) and Ronnie Quintarelli (Italy) took victory after starting from pole position. This win sees them come back from third in the rankings to achieve a comeback championship victory. 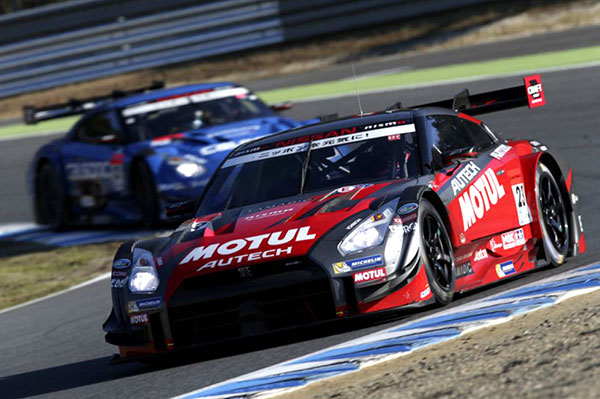 The dominant victory saw the #23 Nissan GT-R NISMO GT500 win by over 50 seconds, delivering Matsuda his first Super GT title and Quintarelli his third. It is the fourth driver’s title for the Nissan GT-R in seven years, and gives the flagship #23 NISMO entry and the Nissan NR20A engine championship glory in the first year of the new ‘Class One’ Super GT regulations.

Twin Ring Motegi was blessed with fine weather for the entire weekend and with a total of 47,500 fans coming out to watch over the two days, this final race, a make or break for the title, was aptly abuzz with excitement. After one formation lap the 250km (53 Lap) final race began at 1:07pm.

Starting in pole position, Ronnie Quintarelli, driving the #23 GT-R, immediately shot out in front of the top group and began pulling away from the pack. After this, championship candidates, the #36 Lexus RC F and the #12 GT-R, made contact at Turn 7, but fortunately this would not affect the #23 GT-R nor the #46 S Road MOLA GT-R (Satoshi Motoyama / Masataka Yanagida), which was running in 2nd, and they continued to extend their lead.

Quintarelli then pitted at lap 29 and handed the wheel over to Tsugio Matsuda. At this time the crew carried out a flawless, lightning fast pit stop to refuel, change tyres and so on, and then sent the machine back out onto the track in a provisional second place. When the #19 RC F, at that time driving in the lead, went into the pits at lap 33, they returned to the top spot and Matsuda executed an impeccable drive to expand their gap with the competition.

Later, the 2nd ranked #37 RC F furiously lifted its pace, eventually rising up to 2nd place where it desperately tried to reel in the #23. However, Matsuda could not be outdone and by the time he crossed the finish line he had raised the margin to 52 seconds. Thus, the #23 GT-R achieved a perfect lights-to-flag victory. With this, their second victory of the season, they have achieved a turnover to take the top spot in the series rankings and capture NISMO’s first series championship in 6 years.

Starting form a second place qualification, Yanagida drove the #46 GT-R for the first half of the race and successfully protected his position but, due to a yellow caution overtaking, was handed a 10 second stopping penalty and fell down the order. Although they temporarily dropped back to seventh, Motoyama took over in the second half and made a spirited come back to see them finish in fifth.

The #24 D’station ADVAN GT-R (Michael Krumm / Daiki Sasaki), which displayed some serious speed at the last round in Thailand, was also in top form for this round. Beginning from a 14th place qualification, Sasaki drove at a furious clip to raise them up as far as third in the first half before handing the reins over to Krumm. An intense battle between third and fifth place ensued and eventually Krumm came out in fourth. The #12 GT-R was slapped with a drive-through penalty for making contact with the #36 RC F, which left it completing the race in 13th place.

In the GT300 class, NDDP’s #3 B-MAX NDDP GT-R (Kazuki Hoshino / Lucas Ordonez) began the race from a seventh place qualification. They fought a hard battle while simultaneously tending to brake and tyre issues and completed the race in eighth.

“My heart was pumping right up until the final moments of the race because you never know what can happen,” said Shoichi Miyatani.

“To win the race and become the champions is the perfect end to the year. At the beginning of the season, NISMO proclaimed that it would be by far the strongest new machine built under the renewed regulations and I’m relieved to see that today we have proved that.”

“I really want to thank all of the fans who have stuck by us for the six years we (#23 MOTUL AUTECH NISMO TEAM) have gone without taking a championship,” said Yutaka Suzuki.

“Thank you all so much. Today Ronnie and Tsugio gave us a great performance. The team also performed beautifully which allowed us to complete a perfect race. I intend to keep carrying out top quality race performances that are worthy of the NISMO name so I hope we continue to receive everyone’s support.”

“I’ve been competing in the SUPER GT for quite some time and I just haven’t been able to get my hands on a championship so I was starting to think that maybe I had missed my chance.

“However, all those worries have enabled me to appreciate this moment even more. I want to thank, from the bottom of my heart, everyone in the NISMO team who built an incredible car as well as all the fans.”

“This year is the 30th anniversary of NISMO and to give the title back to NISMO in this special year is something special,” said Ronnie Quintarelli.

“I was really confident in the car’s set-up and choice of tyres even before we arrived at Motegi.

“We were able to ride on such a good momentum because everyone in the team was brimming with energy. I’m ecstatic to be able to win a championship in front of such a huge crowd. Thank you all very much.”